The outdoor flowers may be underperforming, but the indoor amaryllis has been picking up its slack.

The overachiever amaryllis has a third bloom on it, whereas the underachiever managed one blossom and was long ago put away to rest and recuperate and hopefully bloom next year. In its defense, though, it did jump off the shelf in despair – or was it pushed? – and that affected both the lifespan and overall jauntiness. I’m sure being right next to the overachiever, flaunting its seemingly endless and giant flowers, didn’t help either.

The line between indoors and outdoors is always somewhat blurred at Stately Suzy Manor, which is one of the reasons that Mark was performing surgery on the somewhat odd kitchen sink drainage system one sunny afternoon.

My house was hand built by a hippie back in the day. He was an artist and eccentric, who bent all the redwood himself by hand to create its characteristic upside down rowboat shape: 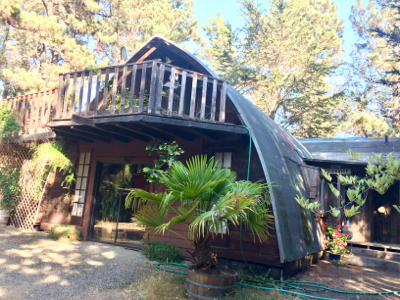 So you will probably not be surprised to hear that the kitchen sink drains into a sort of cement pan under what I rather optimistically call the back porch, though it is in fact just some wooden slats hammered together, seen here being modeled by our lovely spokescat, the Adorable Audrey Grey: 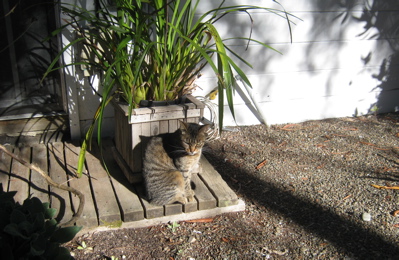 The outside shower also drains into this, and then into a pipe that snakes its way invisibly (which is somewhat surprising) to the nearby woods, where it empties into a ditch. I am guessing that the indoor shower might also hook up to the exit pipe at some point, though I’m not sure. The indoor bathroom was a later addition after the house’s architect went to the great drafting board in the sky.

So occasionally the pipe gets plugged and backs up into the cement pan, which in turn smells less than delightful. Mark basically snaked out the exit pipe and dug the ditch a little longer and deeper and everything was back to what passes for normal around here after he sluiced out the cement pan.

Needless to say, the dogs were extremely interested in the grossness of it all, as dogs are. They spend a fair amount of time at my house, greeting me when I come home from work and cruising by for petting when the mood strikes them, and I have gotten quite attached to whole herd of them, from the grande dame Luna to giant puppy Kovu.

While Mark was working on the drainage system and shooing the dogs away (or attempting to), he told me that he is planning to move to Southern California. He has a thriving business selling succulents on the interwebs, and says the plants will do better in a warmer climate. He is hoping I can take over responding to customer emails and maybe write a blog for him.

I’m happy to do that, but I am really sad to lose Mark and his family: 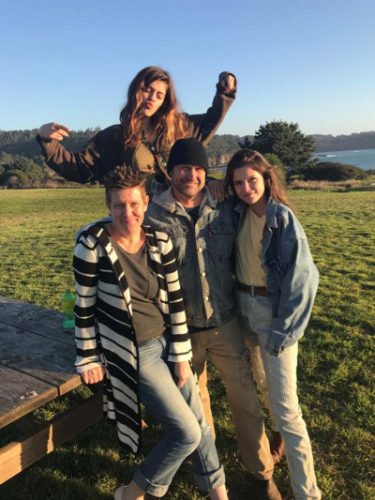 as my neighbors. I love knowing we are there for each other. Mark’s sister-in-law and her husband will still live here, but it won’t be the same. I will really miss the dogs, too. The thought of their not being there to greet me – and to keep the property safe from monsters, as they do with their patrolling – makes me sad.

I guess we’ll see what happens. In the meantime, I will enjoy my neighbors’ friendship and pet the dogs as much as I can.