Zombie Monday wasn’t as bad as I had feared, at least physically. I felt fine, despite getting up at 4:00 am, disguised as 5:00 am, and hating the fact that I was plunged back into darkness on my way to work, yet again needing a flashlight to get to the car and high beams once I was in it.

The animals in Hooterville apparently did not get the memo that the humans were doing something stupid again, since the skunks, deer, and rabbits were going about their usual business by the side of the road as I drove by and startled them. I will never understand why we put up with this craziness twice a year.

Work has been crazy, too, with more drama than my two brain cells can comfortably handle, and winter is trying to make up for skipping most of the season by jamming all the rain into two weeks, the rain version of summer school.

So it’s pretty much been gloomy inside and out, which made it the perfect time to go and see Angelika and get both the inner and outer Me looking and feeling brighter.

I dashed into her little salon in the big woods, where everything smelled like soothing lavender and there was soft music and a smiling Angelika. This time, we decided to go a little lighter, and thanks to Megan putting 100 “Angelika Bucks” in my stocking, my wallet was not lighter.

My spirits were, though. Angelika is such a wonderful, positive person and being around her always makes me happy.

On my way home, I was behind the school bus on the rainy Ridge, and I saw a little girl get off the bus. She was quite small and wearing a little white wool cap. Her father met her at the foot of their driveway, and enfolded her little body into a big hug. I could see her hugging back and their dog bouncing around joyously, wagging his tail. How’s that for a welcome home?

Back home, I discovered a formerly festive red skirt lying forlornly in the yard: 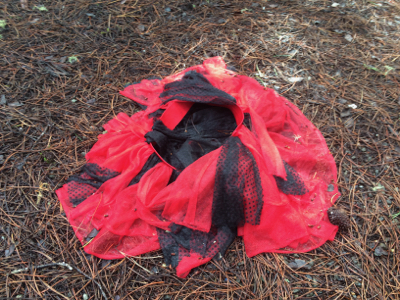 Sometimes I wonder what goes on around here when I’m at work. Mark’s herd of dogs gave me my own enthusiastic and muddy greeting, so there were at least two happy girls on the Ridge that afternoon.

A YEAR AGO: Of cats and dogs.

FIVE YEARS AGO: Trying to get divorced.

TEN YEARS AGO: Nothing worked, except me, of course.