Wondering what’s been happening in SuzyWorld™?

Well, lots of nothing mostly.

The car thing is dragging on into its millionth year. There has been a certain amount of progress, however. The slowdown/lack of power thing has not reared its ugly head again after my brother reset the car’s computer brain (if only he could do that for his now younger sister’s brain!), and I learned that the slowdown thing is linked to the wrench light, not the engine light. Apparently the wrench light is to be feared much more than the engine light.

And the engine light is on again, or still. It seems to have something to do with air hoses or emissions or something not tragic. Jonathan and Rob are supposed to look at it again this weekend and order the necessary parts. I am still waiting for them to change the brake pads and do the oil change, since they want to do everything at once, which is understandable, but also slightly frustrating. In the meantime, Wednesday is still going and stopping, which is all I really require of a car.

The inspectors came out to inspect Mark’s trenching project about a week ago. He said he would fill it in and apply gravel so it’s not a mud bath around my house, but you may not be surprised to hear that nothing has happened. We are going on a year now, and I have to change shoes to take out the garbage or go to the compost pile, and then change them back again, which has gotten pretty old. Needless to say, the driveway is a potholed and puddled nightmare again. Or still…

I have been trying to spend time with my friends in an effort to through off the nebulous malaise, the worry about the car, and the impending doom of the holiday party and annual fundraiser at work. Jim and I met for drinks at Ledford House and enjoyed the sunset, which happens so fast this time of year, like a curtain dropping: 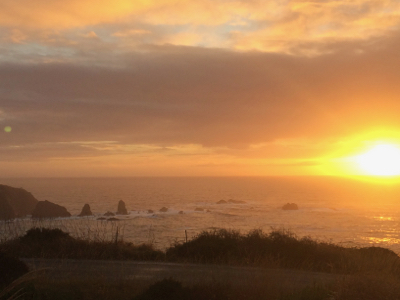 His parents have sold their house in Palm Springs and are moving into a smaller apartment, so he has been helping them go through their things and downsize. So many people I know have aging parents, and some have both aging parents and challenging teenagers, a difficult barbell to balance.

I saw Angelika both professionally and personally. She brightened up my hair one day and we met for lunch on another. She is so positive and inspiring! I am really glad we have expanded our relationship past the professional. Her friendship is a gift.

I met up with the owners of the dog I hit with the car last year – last year! – and we had lunch together. I am pleased to report that the dog is just fine, and you can hardly even see the scar, though it is sprinkled with white hairs, much in the way Clyde’s neck is from where the Slobber Monster tried to kill him a few years ago. It was great to spend some time together under better circumstances, and we have plans to walk my recovered victim in the Botanical Gardens.

And Erin and I finally found time to hang out together over a glass of wine at her lovely house. She got a “new” job a couple of months ago (when I turned down an offer for her old one, which I have had cause to regret from time to time ever since), and this was the first chance we had to catch up and talk about it. Erin’s Mom was there, too, the glamorous Carol. We had a wonderful time and we promised each other to meet up soon. There’s nothing like spending some time with friends to throw off the mysterious malaise.

A YEAR AGO: A day at the beach in beautiful Elk.