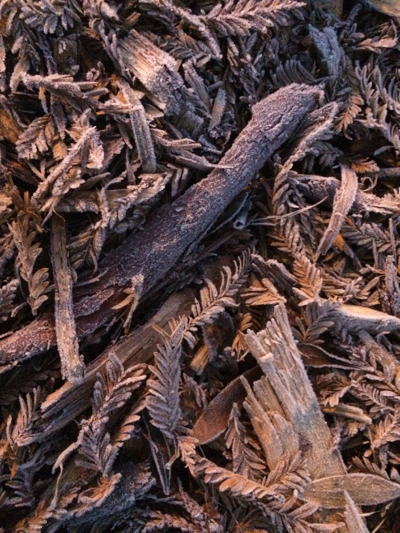 I’m sitting in bed with the heater and Audrey purring away (Clyde has been Adventure Boy lately, spending more time in the woods than I personally enjoy). I got up when it was actually light out, turned the heater on, made coffee, and took it back to bed. I love doing that.

It’s been pretty chilly lately. The house is about 42F when I get up, and it’s been hovering around the 32F or lower outside overnight. On solstice morning, I discovered that Wednesday’s windows were iced up hard. The door creaked when I opened it. I left the car running for about 10 minutes before heading out to the Ridge, which was a winter wonderland, sparkling with frost. That’s about the closest I have ever gotten to driving on snow*, and I’m happy to keep it that way.

The shortest and darkest day of the year also happens to be my boss’s birthday, much to her displeasure. Besides those two disadvantages, her birthday has historically resulted in the dreaded combo gift, and when she was in school, everyone was always on break, so she never got the little school parties with her classmates, either.

We tried to make it up to her by taking her out to lunch at a restaurant overlooking the harbor. It was a sunny, postcard day, and fishing boats chugged in and out while seals played in the frigid water. I am pleased to report that she was showered with gifts by coworkers (including me). One came in to drop off flowers on his way to a hunting trip, and her husband sent an arrangement that was so beautiful that another colleague took one look and called the florist to order the exact same arrangement to be delivered that day to his own wife.

I left work after lunch, stopped by Monica’s shop to exchange gifts, dropped off library books (sadly, there were none to pick up, though I am observing my own sort of advent by re-reading “The Box of Delights”, timing its 12 chapters to end on Christmas Day. Dad used to read it out loud to us in that manner), and made one last stop at the post office, where I was overwhelmed by a tide of cards and presents to the point that Darlene helped me to carry it all to the car.

Let the holidays – and the celebrating – begin!

*I learned to drive in San Francisco, in the beautiful Presidio.