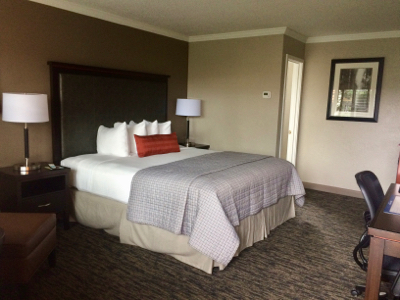 Home away from home

Hi! I’m coming to you from Eureka! Eureka is what I said when I finally got here, too.

I thought I was mentally prepared for the long and winding road that is Highway One, but as usual, I was wrong about that. By the time I had reached Westport, I felt like admitting defeat, turning around, and going back home to the kitties. But I pressed on, and when I finally emerged from the horrors of Highway One and its bipolar ups and downs and curves so crazy they are signposted at 15 miles an hour, I was crushed to discover that I had another 90 miles to go.

I shouldn’t have been surprised, though. All signs had pointed toward Things Going Wrong. Megan woke up sick the day before we were slated to go, so instead of her capably driving while I was the passenger, the way Nature intended, I was demoted to driver, with no company and an increasing paranoia about the ever present engine light and lack of cell service.

My friend Janice’s son-in-law had unexpected surgery, so her daughter Julie could not join us at dinner, and once again I was demoted to chauffeur in a strange land. As I headed out in the near zero visibility night time fog, it soon became clear that I too was sick, or getting there. Why not? I tried not to look at the kitties’ lovely parting gift to me as a bad omen: 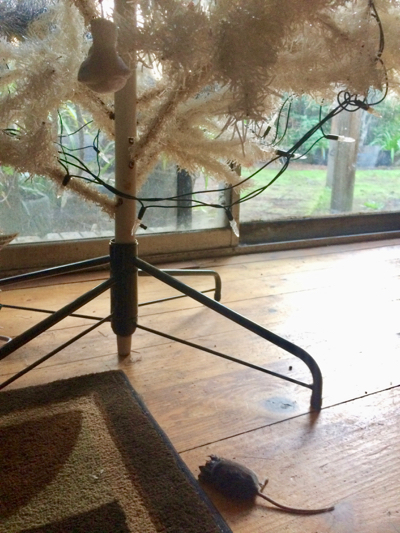 I did my best to ignore my body’s rebellion and thoroughly enjoyed a European length dinner with my dear friend Janice at one of her favorite local restaurants over a bottle of local wine. We had a lot to catch up on. She had a very challenging year, though she met one disaster after another with grace and strength and her head held high (and of course, her hair and make-up done). It was wonderful to just be with her, listening to her deep, lilting Southern accent, her vivacious laugh, and her astonishing anecdotes. Her friendship is a wonderful gift.

As for today, I am pleased to announce that I am not driving. Jarrett is going to play tour guide today and show me around his town, and tonight we are having dinner with his girlfriend, the beautiful Kalli, at their favorite local restaurant. And I will think about the drive home tomorrow…tomorrow.

FIVE YEARS AGO: A winter wonderland.