My (now older) brother’s birthday fell during the Worst Long Weekend Ever. His birthday, near or on Labor Day, (allegedly) ends the summer, and my sister’s, on or near Memorial Day, starts it, their birthdays bracketing the tourist season.

It was still about a zillion degrees as I headed to the family estate, driving really slowly so I could bask in Wednesday’s blasting air conditioning during the quarter mile drive. The canopies were up, but they were no match for the Evil Death Star. I packed my county fair straw hat with ice and put it on my head, but really, nothing could help.

As I write, it’s foggy but still not cool. Like 100+ degree temperatures, I have never experienced this before. I may have been scarred for life. I am still obsessively checking the weather forecast and am appalled to see that they are calling for highs of 76 on Sunday, which is probably code for 96. Why does it always have to be hot as hell on the weekends? And when is this heat going to go back to hell, where it belongs?

As for the party, it was well-attended, with its many guests spanning several generations. Even though it was his birthday, my brother still manned the grill, turning out turkey burgers, hamburgers, and sausages to go with garden salad: 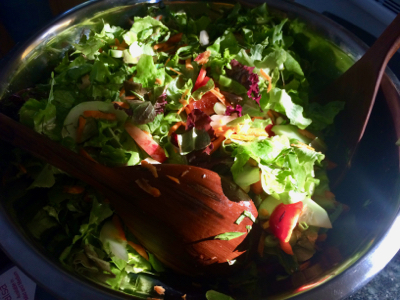 Jessica and I took our plates to a shady spot, where we were joined by Scout, Jonathan’s mini cat: 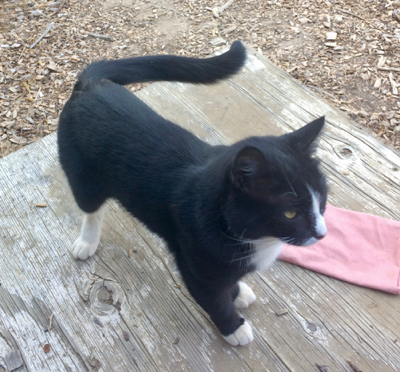 You can gauge something of her diminutive size by comparing her to the folded napkin beside her. Here you see Jessica feeding Scout hamburger morsels, which may have had something to do with the world’s most skittish cat hanging out with us: 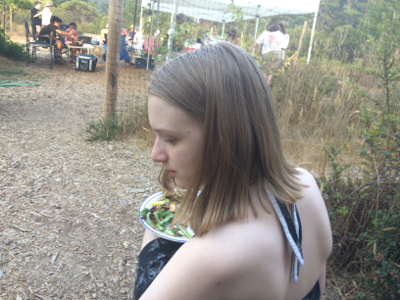 I also convinced Jessica to pose for a picture, wearing my ice-less hat: 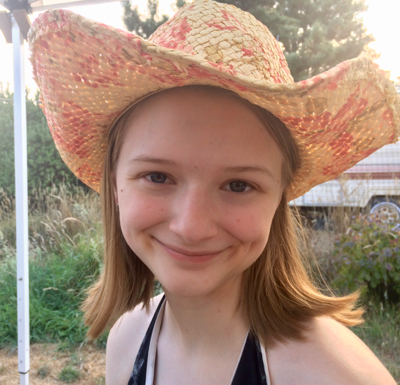 I’m sure these days are rapidly coming to an end since she is 14, so we will have to enjoy them while we can.

While Jessica was visiting over the weekend, we hid in the relative cool of Megan’s house (it is so shaded by trees that it is always cool; nice during a heatwave, not so nice in the winter) and had a mini 80s movie festival, watching “Working Girl” and “Desperately Seeking Susan”. Jessica found the 80s fashions hilarious, though she loved Madonna’s style in “Susan” and pronounced her “super pretty”. I agree – that is my favorite era of Madonna’s looks. Jessica coveted the pyramid jacket while I still covet the skull hatbox/suitcase and the glittery boots. And we all sighed over Harrison Ford and Aidan Quinn.

All in all, it was a fun evening. Now if the weather would start behaving itself…

A YEAR AGO: At the circus.

FIVE YEARS AGO: The jobette moved uptown, among other things.