On my way home from work on Saturday, I stopped at the Gro for cracksicles. They are delicious pomegranate and cherry popsicles, made of fruit and juice with chunks of fruit in them, and around here, the only place to get them is the Gro.

At the Gro, I discovered that they were out of cracksicles, the supply being down to undesirable flavors like banana. I also ran into yet another co-worker, who was buying beer. And beer. Also, beer. Who am I to judge? After all, I was trying (and failing) to buy cracksicles.

On the bright side, I did get a late-breaking birthday present, so it wasn’t a total loss. I seem to be having a birth month this year, and Junapalooza hasn’t even happened yet.

Arriving at the family estate, I noticed that Rob had replaced his original gate ornament, a modest, but charming pinecone, with one of his amazing sculptures: 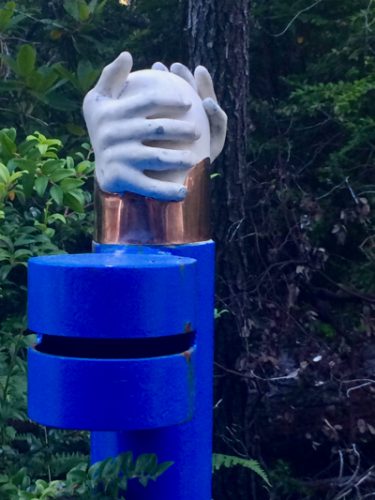 Those are skillful casts of Rob’s skillful hands. He’s got the whole world (or at least the whole gate) in his hands.

The garden had sprouted a nice crop of tents: 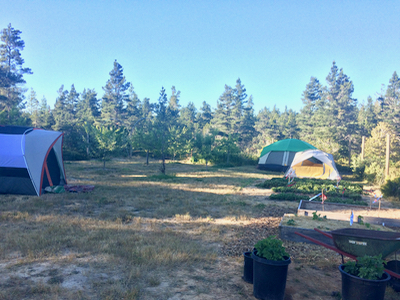 Must be all that rain and all the relentless sun! Jarrett and Kalli had brought a group of their friends. They have done this camping party for the past few years, usually around Kalli’s birthday in July (which she shares with Audrey). It’s a nice tradition. It seemed like a long time since we had seen them, so it was good to sit under the shade of the canopy from Rio’s daughter’s wedding and catch up over some home-made cider.

We had a taco bar for dinner, with Megan trying her hand at al pastor in her instant pot. It was really good, but the star of the show was dessert. Jonathan made two different sorbets from fruit picked in the garden that day: strawberry and raspberry. They were both delicious, though I’d have to say the raspberry was my favorite. Jonathan thinks he can vacuum seal batches over the summer and store it stacked up in the freezer.

We were having so much fun that I forgot to take pictures, except the ones in my head. And my heart.

A YEAR AGO: The most amazing gift ever!

FIVE YEARS AGO: The many joys of the jobette. Those were the days!

One thought on “Get Together”