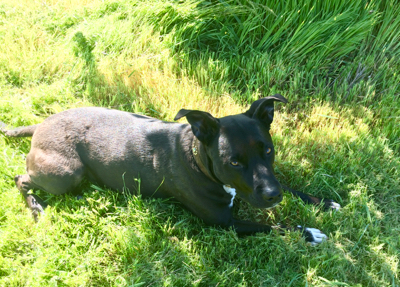 The patient in happier times (last week, in the garden)

I was just settling down to watch some playoff hockey* and eat dinner when the phone rang. It was Megan, telling me that Star had had a seizure and she wanted me to meet her at the vet’s office.

I changed out of my PJs and into a strange combo of work and play clothes, shoving my bare feet into a random pair of shoes (later I would regret not putting on a better pair after hours of standing) and set off for the Village.

On the way, I wondered why she had called me, since dealing with emergencies is her specialty and falling apart at emergencies is mine. I always say, Megan is the Schatzi (brave and bold) and I am the Star (worried and pretty sure the worst is going to happen).

Arriving at the vet’s office, I saw Megan’s little red car with the back door wide open, but no sign of dog or humans. I eventually located Megan, Dr. Karen, and Star in the surgery. They seemed to have it all pretty much in hand. They had shaved Star’s forepaw and inserted a catheter, through which they dosed her with enough drugs to drop a horse.

But Star’s Star-ness did not allow her to give into the drugs, so while being doped to the ears, she still fought it and was twitchy. If it comes to fight or flight, Star is going to fight to the death. I suggested that her inherent Star-ness would not allow her to give in to the drugs while still in an environment that made her fearful even with Megan there, but Dr. Karen and her assistant wanted to wait and see how she was doing. They ran every blood test, all of which came back normal. The general consensus seems to be that she ate something to cause the seizure, though the property has been investigated three times by Megan, Rob, and Jonathan without turning up the culprit.

After about three hours of doping and testing and IV hydration (them) and standing around (me), they rolled the patient up in a blanket and put her in Megan’s car to be transported home, along with a goodie bag of injectable drugs. Of course it was pitch black by then and so foggy that constant windshield wiping was required, just for extra fun.

I followed Megan and Star home, with the understanding that if something went wrong, she would pull over. We drove slowly, partly because of Star and partly because of the weather, and I stayed a respectful distance behind so my headlights wouldn’t bother Megan. Driving in the dark is the only time I dislike having a car behind me more than I dislike having one ahead of me.

Star was very glad to get home, and as I expected, she crashed and burned upon arrival in her safe place. She was probably exhausted from the seizure itself and the subsequent twitching, as well as the boatload of drugs, so she slept a lot the rest of that night and into the following day. She now seems to be just about back to normal, to the relief of all concerned. Let’s hope it stays that way. I still don’t think that I really helped or added much to the occasion, but Megan says she was glad I was there, and that’s all that really matters, besides Star being well again.

*I’m sorry to say Ottawa won. At this point, the best case scenario is Pittsburgh winning the Cup.

A YEAR AGO: Celebrating Megan’s birthday in style.

FIVE YEARS AGO: A really lousy birthday for my wonderful sis.

2 comments on “The Star Patient”