I was chauffeured to the latest Predicta Party in the latest style. Erica and Jessica picked me up in their brand-new Hagmobile.

It was quite wonderful to relax in style in the new car smelling interior. Erica and Jessica later noted that I seemed to be enjoying myself, and also that being chauffeured (or chauffeused) seemed quite natural to me. I’m telling you, I should never have abandoned my original career aspiration of Idle Rich.

I can’t remember being in a brand new car before, unless it was my grandfather’s red Dodge Dart Swinger. I remember it was the last car he ever bought and he said he had always wanted a red car*. I was more interested in the candy he kept in his glove compartment than in the car itself, and some things never change.

Others do, though, and the Hagmobile is quite wonderful in its ability to keep you going at the same speed you were before you started driving downhill, somehow defying the laws of physics so you don’t accelerate as you go. And it has a way of lighting what is behind you on the screen in the console so you can back up in country darkness and see what you are backing into.

Arriving at Rio’s compound, we gave the girls a tour since they have never been there before. We ended at the studio/garage where we made the cider last fall, and Erica and Jessica promised to join us in cider making this fall.

Clayton arrived from San Francisco on his red motorcyle, his hair tangled by the ride and feeling chilled despite the heavy leather outerwear he (wisely) wears on the trek from the city. He settled by the fire and I poured him a glass of cider in the sun glass, the largest and warmest-looking one in the set of planet glasses I gave Jonathan for Christmas. I have to admit my favorite is the tiny (and now demoted) Pluto. 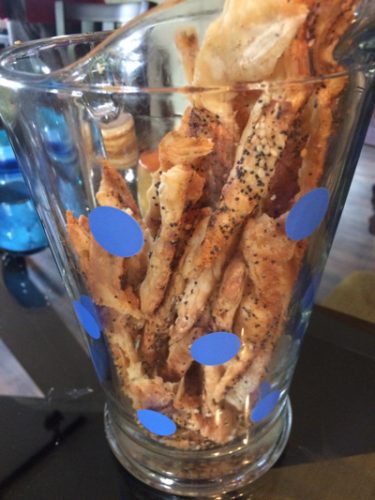 I later learned that they are pastry cut in strips and then rolled in seeds and spices. Whatever they are, they are delicious!

She also brought the pièce de résistance, pineapple upside down cake, a retro dessert for a retro evening: 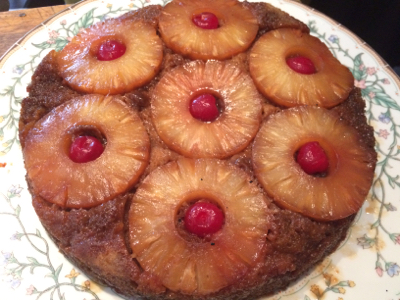 It was, as you would expect, also delicious. I am looking forward to Megan’s birthday BBQ on Memorial Day weekend and Junapalooza in late June.

Jessica was thrilled with her Bookstore Day haul, and delighted by watching an ad for a 1959 Predicta on a 1959 Predicta (“TV Today from the World of Tomorrow!”). Also by Honey West and Bewitched, which she had never seen before. It’s so nice to share things you love with people you love.

*I’m glad he finally got his red car. Red was his favorite color, and I wore a red dress to his funeral just for him, despite the consternation of onlookers.

A YEAR AGO: It was hot and the power was out. What’s not to hate?

FIVE YEARS AGO: This Calamity Suzy thing is not new.

2 thoughts on “Going In Style”