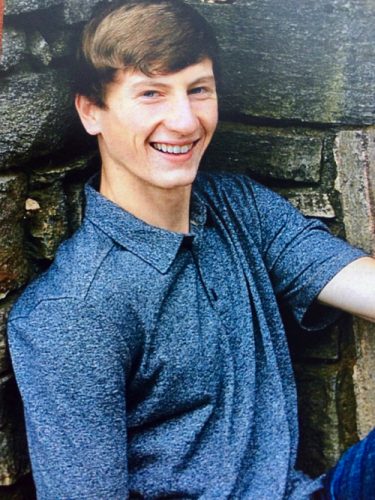 It’s been a difficult couple of weeks. I don’t usually write here about dark things, since this place is my refuge and I can banish the unpleasantness of the outside world from here, but as you know, from time to time, these things have to be faced. Fortunately, I have my brother and sister to face things with me, and we faced the memorial service for Blake together.

Blake and his father have been guests at our family gatherings, and we were all shocked and saddened to learn that Blake had died at the age of 20.

The day of the memorial service dawned bright and beautiful, a spring day when everything is coming back to life, with flowers blooming and birds singing as they build their nests and their families, fresh leaves bursting forth from the trees. It seemed so wrong to be commemorating the terrible loss of someone so young, who was himself only in the spring of his short life.

Blake’s parents belong to an evangelical religion which was started the same year my brother was born. I have to admit I was hoping that at least there would be tradition and ceremony to bring us some comfort, as there was at the long-ago and very moving bar mitzvah I attended. However, that was not the case. This particular religion is pretty adamant that if you don’t belong to it, you are going to hell, and that is that. I have never heard the word “wretch” so often in such a short time, and I am sorry to tell y’all that those of us who are not born again are “down in the mud with the pigs.” The service – for this lovely boy who died so young – concluded with the preacher trying to get extra converts to their religion and inviting us to consult with him about joining their cult after the service. Maybe it’s being brought up by atheist parents, but I found this unseemly, especially after being berated about my sinfulness. Weren’t we supposed to be remembering Blake?

Despite these religious oddities, there were some really nice moments. There was a montage of photos of Blake’s life, and a charming video of his catching a fish almost as large as he was when he was a young boy (and then releasing it). His two best friends, who had known Blake all his life, gave touching speeches. The chapel was full, with hundreds of people in attendance. I wonder if he would have been surprised to know how loved he is. I hope he knows he is.