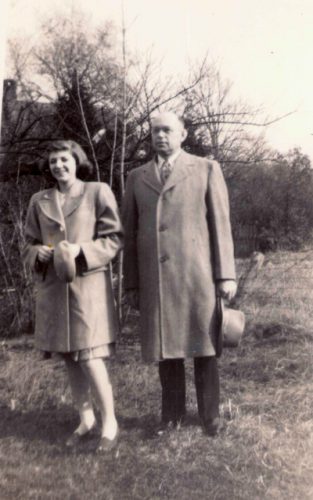 Mom and her father

Today would have been my mother’s 85th birthday.

Sometimes I am surprised by how much time has gone by since we were orphaned. In some ways, it seems like it just happened, and in others that it was so long ago. With the unpredictable elasticity of grief, some anniversaries of births or deaths make you feel almost as bereft as you did when it first happened, and on others, you remember more happy memories. And it’s pretty much impossible to say why or know how you’ll feel until it happens.

My mother has not figured in these pages as much as my father. We did not always have the easiest relationship, and it is only now that I have begun to understand her better. She had a difficult life, there is no doubt about it. She was abandoned on the steps of an orphanage as a baby, my father left her, she married a man half her age who spent all her money and left her on welfare to fight a valiant battle against cancer. Hers was a long and terrible death, which she fought bravely to the end.

But she was also loved. Her parents adopted her when she was about three, picking her out at the orphanage like a puppy at the pound. We do not know anything about her birth parents, though there were rumors that her father was a doctor and her mother a patient. My mother didn’t care, though. Her parents told her that they chose her out of all the children in all the world, and other parents just have to take what they get.

Dad met Mom at a wedding and was charmed with her looks and joie de vivre. He was finishing his PhD in England and she lived in New York State. While he finished his degree, and when he took his round the world tour afterwards, he wrote her constantly, and I still have the wonderful love letters in their blue airmail envelopes, with drawings and photos and descriptions of the many wonders he had seen and how he missed her.

They definitely loved each other, though they were very different. Dad was scientific, Mom was artistic. She loved music, he was tone deaf. She was utterly American, he was English to the core. In retrospect, it’s probably not surprising that the marriage didn’t last, though like mine, it did last a long time.

I just wish Mom had found the happy ending Dad did. And I wish I could tell her that I love her and miss her. When I think of her, I think of her sparkling green eyes, beautiful, thick, golden-brown hair (which Megan inherited), her pleasure in beautiful things, from music to jewelry, her laugh. I think about sitting in bed with her – she was a night owl – watching “Saturday Night Live” back in the 1970s together. She was delighted by Devo’s avant garde version of “Satisfaction” on that show. I think of how she welcomed Gilbert, Dad’s graduate student from Tanzania, into our family for a few years when his family couldn’t get money out of the country to him. I think of her driving fast with music on loud in the car, the way I do now, the bracelets I now wear jingling on her wrist, shining in the sun.

She was strong. She was brave. She was unique. I am glad she was my mother.