Megan and I had grand plans to see the Bolshoi Ballet performing “Sleeping Beauty”, but Mother Nature had other plans.

The appointed day dawned dark and dreary, and as the day went on, it got rainier and rainier. We already knew that the Road to Civilization was flooded and closed: 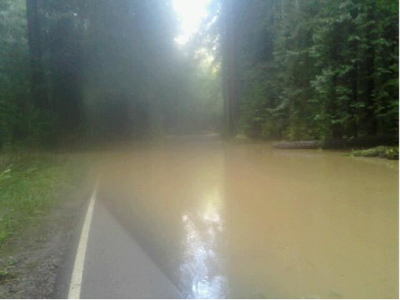 and that it was very likely that the river over which the Road to the South Coast passes would flood, too, effectively stranding us on the South Coast if we made it that far. We speculated on how we might possibly get home if we were marooned, and decided that we’d have to keep going south to Jenner until we could find a road to take us to 101, then to 20, then from the Big Town back to Hooterville.

Since this winding route would take several hours and Megan was scheduled to work that night, we decided to stay home, missing both the glories of a beautiful ballet and the joys of Thai food.

We aren’t imagining that we’ve gotten a lot of rain this winter. Our friends at PG&E, those fearless repairers of power outages, say it’s been the wettest January in 20 years ’round these parts. The local message boards say we have received 16 inches of rain in January so far. I well remember the winter of 1996-1997, when it rained every single day in January and February. I worked in an old building in downtown San Francisco with exposed brick walls, and the rain ran down the walls – inside. I had clear plastic draped over my computer to cover it from the inside rainfall.

I still have inside rainfall. The laundry room has flooded as per usual, and the usual leaks have sprung to life. On the bright side, though, the drought is definitely on the run for now.

With no Thai food on the menu for dinner, I started rummaging around the freezer for a Plan B. While in the midst of this icy exploration, Rob came by to hang up a picture for me. Hanging up pictures on curved walls takes expertise and patience that are far beyond my mortal abilities, but are no problem for Super Rob: 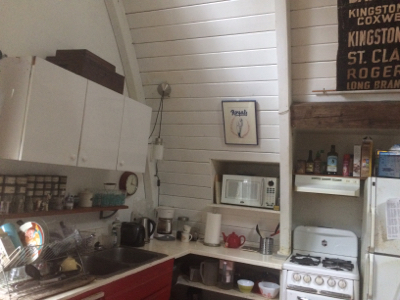 After he hung up the picture, Rob also investigated why my vacuum cleaner’s performance had been suboptimal lately, and discovered a clog in the hose, which he removed, allowing me to vacuum up cat hair and pine needles with abandon.

With the house in order and the rain falling outside (and in), I curled up on the couch with a Patricia Highsmith novel under my grandmother’s ancient quilt, a cozy way to spend a winter afternoon.

A YEAR AGO: Adventures in cooking. It takes a special talent to need three takes in making mashed potatoes.

FIVE YEARS AGO: Rob was fixing things up around here then, too. I wonder how often he regrets his ridiculous sister-in-law moving to Hooterville.