Twelfth Night fell on a Friday. I left work early that day to go to Angelika’s little salon in the big woods. Among my Christmas gifts this year was a gift certificate to get my hair highlighted, so off I went to get both my hair and my spirit refreshed.

Not only does Angelika do an amazing job, applying utterly natural looking highlights and cutting my hair so well that it never loses its shape, even after months, but she is an inspiring person to be around. She is always so positive that I kind of bask in the glow of her presence.

Even though she only colored in the front part of my hair, the whole process took about three and a half hours. She is a perfectionist. And I actually had somewhere to go and show off my new and improved ‘do.

I went home, fed the kitties, turned on some lights, and headed out to Rio’s place in the rainy darkness. The traditional Twelfth Night Christmas ornament removal would have to wait.

Arriving at her house, I found my siblings, Rob, and our dear friend Lu, back from her adventures fighting the good fight at Standing Rock. I also found a pot of my brother’s split pea soup on the stove. It is almost as famous as my cheese biscuits, and rightly so. To make it, he had to cut the Hamzilla bone in half with a hacksaw before making the broth. Like my hair, it is a lengthy but worthwhile process in the hands of a true artist.

With the soup, we had our hard cider, now approaching a perfect balance of apple-ness and dryness, and garlic bread. There was a fire burning merrily in the Franklin stove as we ate dinner together.

After dinner, we gathered around the 1950 Philco Predicta. You may remember that my brother got it in non working condition, but a guy who also made a non working NASA worthy telescope work had no doubts that he could also make a nearly 60 year old TV set work. And he did:

Somehow, he also managed to hook up a modern DVD player to the antique TV set, so we were able to watch a delightful retro program of Honey West, The Outer Limits: 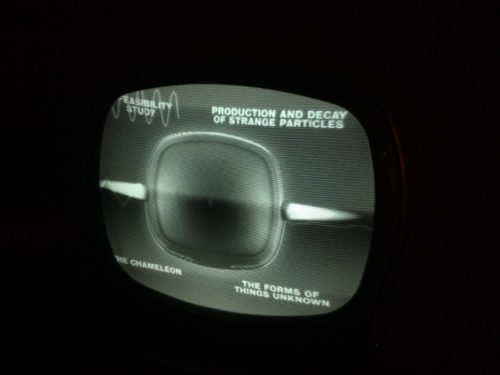 and a chaser of Peter Gunn while we ate ice cream topped with strawberries from the garden that Jonathan had made into a sauce. It was nice to have a taste of summer in the depths of winter. And it was a wonderful evening.

A YEAR AGO: Consulting the experts.