Clyde was exploring the impressive collection of Christmas cards on the shelves by the tree, and in his excitement, he managed to knock off and smash the beautiful little ornament which was one of the gifts I saved to open on Christmas evening: 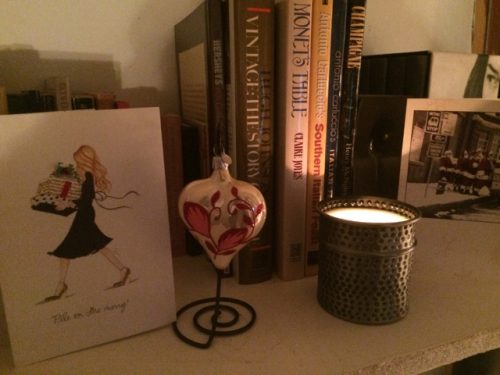 I vacuumed it up sadly. Clyde, of course, had no idea that he had upset the help along with the ornament. I will ask the giver where she got it and see if I can replace it. Not a great way to start the new year. I hope it’s not an omen or anything.

On the bright side, I failed to have a hangover, despite my best efforts on New Year’s Eve. Megan came by and we drank champagne and Cointreau as we watched “The Princess Bride”. It had been a long time since I’d seen it, and it was as delightful as ever.

We paused the movie to watch the ball drop in New York, marveling at the crowds, the utter lack of restroom facilities in Times Square, and the ugliness of the official hats. We also watched the new year arrive in San Francisco, with fireworks over the Bay. It’s been a while since I stayed up late enough to see the new year in on both coasts.

A YEAR AGO: I was much more industrious than I was this year.