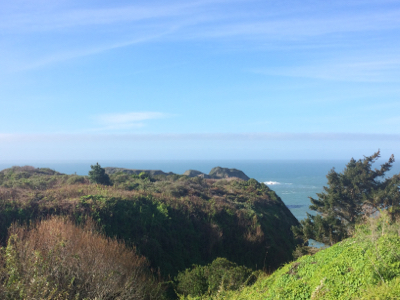 It was a beautiful day in Elk

Here it is this weekend, and I still haven’t written about last weekend!

In my defense, though, I had to stage the giant office End of Year Celebration and clean it up, along with myriad other meetings and drama. The week ended with a birthday party for my boss and a scary drive home in the stormy late night darkness, but I survived it all!

It is still raining hard this morning, making me feel that we are going to have to cancel or at least postpone our plans for going to the Festival of Lights at the Botanical Gardens, followed by the Candlelight Shopping Night in the Village with Erica and Jessica. It is not good weather for strolling around outside, though it seems to be good weather for Clyde to lounge on my shoulder and impede my typing to the best of his fuzzy ability.

Last weekend was a completely different story, though. It was sunny and beautiful. Megan and I hopped in her little red car along with Star and Stella and headed for the little town of Elk. Our first stop was the ever-delicious Queenie’s: 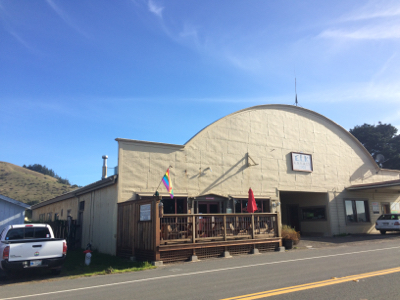 It had been years since I was there – a search of the dusty archives shows my last visit was three years ago! – so it was long overdue. We sat at a table by the window and ordered. The fact that there were only about 6 other patrons gave us hope that the wait for delicacies would not be as long as usual, but this hope turned out to be in vain. It took about 40 minutes to get our lovely breakfast, prompting Megan to wonder whether they were growing the potatoes.

Still, it was up to the usual high standard when it finally arrived at our table, and, as always, worth the wait. There are worse things than chatting with your sister while waiting for someone else to cook for you, not to mention clean it up afterwards.

Our next stop was the community center, where our dear friend Lichen was showing his beautiful cement casts of leaves. It was a Christmas craft fair, and to my (possibly biased) eye, Lichen’s work really stood out among the gnomes and tree decorations: 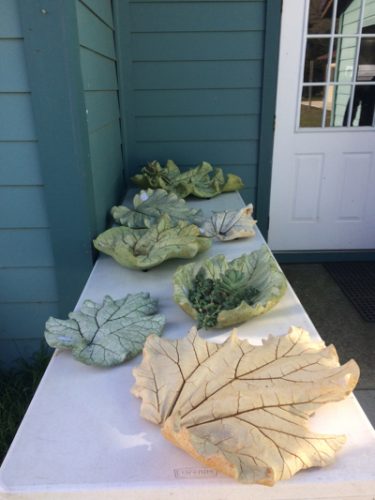 He had already sold four of them by the time we got there! Despite the holiday atmosphere, Lichen was as undelighted by the prospect of Christmas as ever, so it’s unlikely that he will show up this year. You never know, though!

At this point, we decided that it was time that the dogs had some fun, having been marooned in the car all day so far. We took them to Greenwood State Beach.

It took us a while to climb down to it (and even longer to climb back up – there may have been some complaining by some of us), but the ocean was spectacular when we got there: 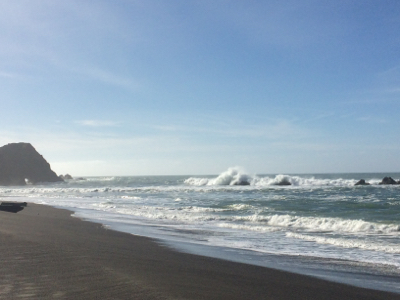 Despite the wind, we didn’t really need our jackets. It was hard to believe it was December! The dogs played happily on the beach while we admired the scenery. Here you see the girls posing on the beach in their cheerful bandannas: 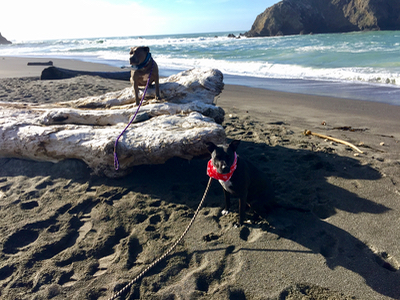 Some of us think it’s an invasive weed, but I think pampas grass is pretty, with its lovely plumes: 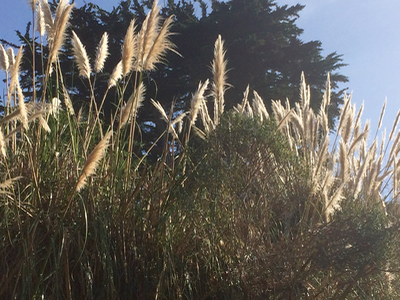 I also like dandelions, though, and most people think they’re an invasive weed, too.

After our arduous (to me) trek, we stopped in at the Elk Store for black cherry limeade to refresh us for Part Two of our day, which took us to Anderson Valley, the redwoods, and the river.

A YEAR AGO: Heartbreak.

5 comments on “From the Beach…”