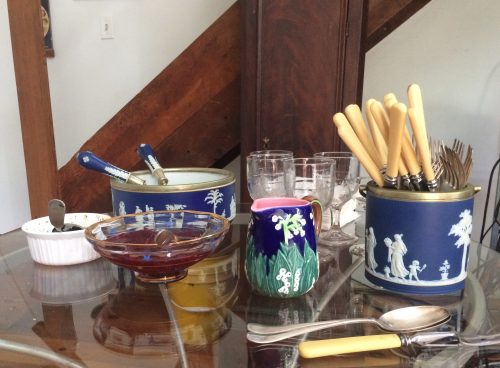 I was planning to sleep in until it was light(ish) outside on this T-Day, but the ever-willful Audrey had other ideas, as she often does. She woke me up at 4:30 to start my doorman duties. I tried to go back to sleep, but at 5:00 am I gave up, got up, and made coffee. Since I was up anyway, I texted Megan, who was still at work, to wish her a happy Thanksgiving and she responded “Calling cops to ER! Yeah! Happy Thanksgiving!” so I guess I should not complain about wayward cats.

It’s just as well that the Audrometer went off as early as it did, though, because it’s about 1:00 pm now and I have finally had time to sit down after running around all day. As usual, I have no idea when people will show up or who will be here, but the house and I are as ready as we’re going to be. For some reason, this year I was finally able to let go of worrying about how the house looks and accept Megan’s always sage advice that the visitors are coming to see me, not the house.

I had the bright idea of dragging the wicker chairs from outside and putting them in front of the heater to dry off from the nearly 13 inches of rain we have received season to date (versus last year’s 3.5 at this time). I cleaned up a bit outside and collected cushions and blankets for those who will brave the chill to sit by the outside fireplace.

I was listening to Curtis Mayfield and working on the dressing when my brother appeared with a bucket of ice, in which he embedded the keg containing the cider we made from our apples. Then he headed home to make tarts from huckleberries he picked during the summer, while I finished off the dressing prep, scrubbed the potatoes we grew and put them in a pot, and prepped for this recipe for honey and harissa roasted Brussels sprouts with lemon relish.

Much like a couple of years ago, I experienced some turkey trauma this year. I was foiled in my attempt to try the splaying technique allowing for braised turkey legs with caramelized onions, though I carried through with the dry brining attempt. The recipe said to roast the bird at 450 degrees for half an hour, but after about 15 minutes it was alarmingly brown. I covered it with foil and managed to jam it back in the oven, though it pretty much touches the top of the oven. I turned it down dramatically and am currently hoping for the best.

After that, I preened and am wearing pearls and a Murano glass necklace bought in Venice ~mumble~ years ago. It goes perfectly with my pink blouse. I’m hoping that the rain holds off and that I will have time to put my unusually elegantly shod feet up and read about Victorian murderesses before the company arrives.

3 thoughts on “Ready or Not”