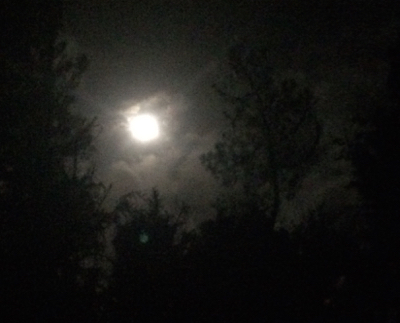 My old friend the moon was blasting this morning, looking suitably Halloween-y and illuminating the road and the ocean the whole way to work in the early morning darkness. It was a welcome change from the conditions I faced last week.

The first storm of the season made an early and dramatic appearance, rocking and rolling all night and leaving a frat party sized mess in its wake. The Ridge was covered with fallen red needles from redwood trees, which are very slippery, and they completely hid both the center line of the road and the edge of it, not to mention the car-eating ditches on each side.

It was still raining and windy, and fog ghosts threw themselves suicidally in front of my car as I drove at a grandmotherly rate through the dark and stormy morning. I blasted KISS and AC DC full tilt to distract me from the horror. I guess it’s not exactly a spoiler to tell you that I survived the drive.

At work, I discovered that my office had become festive overnight: 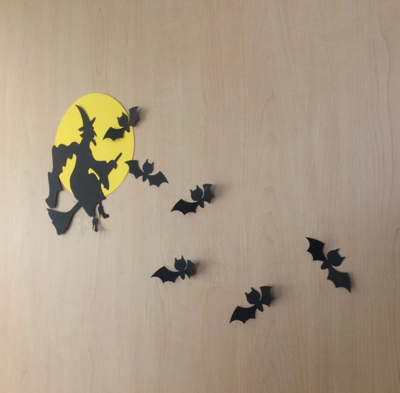 I couldn’t help wondering if it was a compliment or an insult to find a witch on my office door. Are you trying to tell me something?

Meanwhile, back at my house, things were also festive: 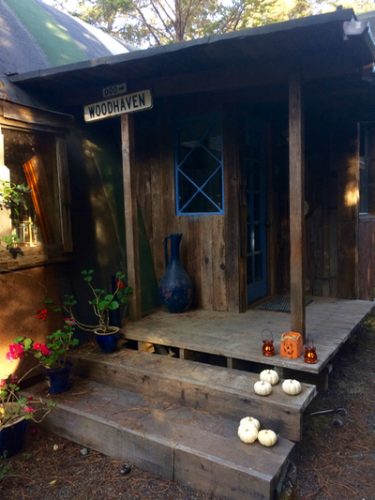 All it needs to complete the Halloween effect is a black cat. You can’t tell from the photo, but in fact there was a black cat loitering in the hallway and peering through the glass in the blue door when I took the picture. Clyde has been spending a lot more time inside lately. A couple of weeks ago, he was not there when I came home, and repeatedly calling him did not result in his appearance.

Panicking as the sky began to darken, I drove out to the Ridge, where I left the car to see if he had been hit by a car and to check the haul road behind the house where he likes to play and roll in the dust. I made the unpleasant discovery that the gate is now locked, making unauthorized human entrance impossible.

I went back to the house and kept looking and calling until it was dark. I was completely sure that my adored and adorable Clyde had joined his beloved brother Roscoe in oblivion and that Audrey was truly the winner of Survivor: Hooterville. Imagine my surprise and delight when he magically appeared at the sliding glass doors around 9:30 as if nothing had happened.

He was undoubtedly mystified when I picked him up and cried into his fur, kissing and hugging him and generally making a complete fool of myself. Clyde was far more interested in the traditional welcome home treats and dinner than he was in being fussed over. You could practically see a thought balloon over his head saying, “What the hell, lady?”

I’m sorry to say that I kept him inside for the next two days, though he undoubtedly didn’t make the connection between his night on the town and his sudden incarceration any more than dogs understand that playing with skunks inevitably leads to a bath. Fortunately, Clyde would make a pretty good house cat and doesn’t seem to mind that there’s been less recess these days.

A YEAR AGO: A long and daunting week came to a happy end.

One thought on “‘Tis the Season”