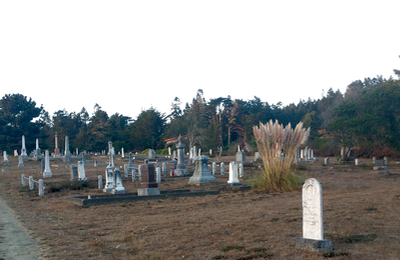 You all know how I love a good cemetery walk, whether it’s in Sleepy Hollow, the final resting place of Brom Bones and Katrina Van Tassel, or the small, but scenic local one with the secret path to the ocean. So it’s not surprising that I found myself with Megan in the old cemetery which faces onto Main Street in the Village. The Village also features another cemetery which is perched on a hill with ocean views. It’s interesting to me that such prime real estate is still dedicated to the dead. All cemeteries in San Francisco were emptied out and relocated to much less desirable locations decades ago.

We were greeted by JD Johnson, who had the distinction of both building homes for the living and final homes for the dead, being the town undertaker and coffin builder as well as a builder of houses, including the Blair House, also known as Jessica Fletcher’s house on “Murder She Wrote”.

Shovel in hand, he walked us through the old burial ground. Along the way, we met Jerome Ford, one of the first settlers, and Captain David Lansing: 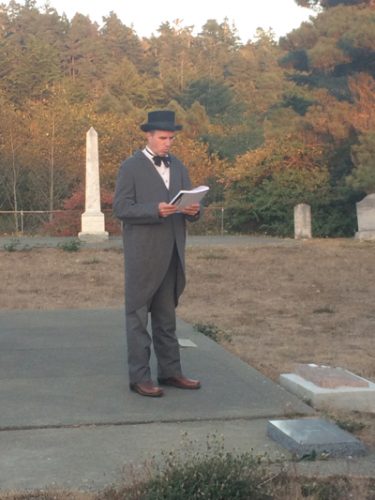 who built his house on Main Street just steps from the cemetery with lumber from San Francisco rather than local wood, which he felt was not good enough for his wife and children, despite the fact that local wood rebuilt San Francisco after the 1906 earthquake and that logging was the main industry here at the time. I hope he approved of the job JD did on his final home: 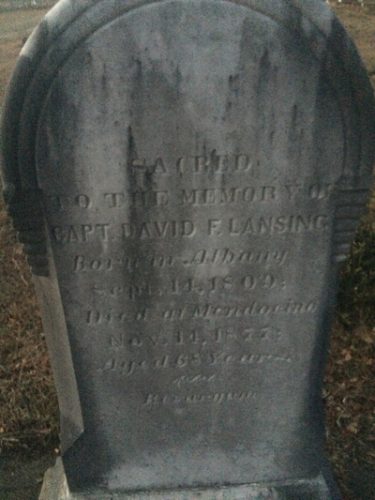 Hattie Blair, of Blair House, came from Maine at the spinsterly age of 27. Unable to find a suitor on the east coast, she came to California where there was less competition, and soon married. Alas, she was widowed following a carriage accident, though she soon married Mr. Blair, who commissioned JD to build a fine house for Hattie at the impressive price of $10,000. Hattie gently chided JD that her present residence was not as accommodating, as she placed a white flower in the undertaker’s buttonhole.

Our cast of characters was completed by Cinderella Wallace, a former lady of the evening in the mid-west who came here to find respectability and a husband, not necessarily in that order. She did find a husband, but respectability eluded her, though it seems she didn’t really mind. She used to watch the townspeople go by from her little yellow house across from the cemetery, and pretty much knew everything about everybody.

She once played a memorable trick on a Swedish gentleman, who used to get drunk and then stagger past Cinderella’s house, singing and yodeling. One night, Cinderella hid in a newly-dug grave with a white sheet over her dress. When the night’s show began, Cinderella leaped from the grave, scaring the Swede so badly that his screams could be heard all over town. He took a different route home at night after that.

We enjoyed the stories and the actors’ performances so much! As we turned to head home, the sun was setting over the Village and its inhabitants, past and present: 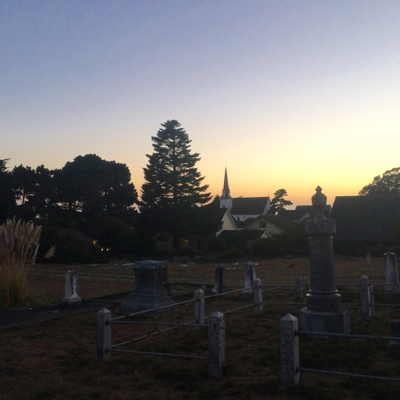 On our way back to the car, we thanked JD for the tour, and talked about possibly volunteering at the Kelley House, whose staff and volunteers were the actors and guide that evening. It might be a fun thing for Megan and me to do together.

A YEAR AGO: I got by with a little help from my friends.

One thought on “Ghost Stories”