It was a busy week, full of friends, family, and work!

I had lunch with a dear friend on Tuesday. She is scaling back at work since her father was just diagnosed with inoperable brain cancer and she wants to spend as much time as she can with him. I really admire her for doing this. So far, both she and her Dad are in good spirits and enjoying every day. I learned that the brain does not feel pain, so he is not suffering, and also that cancer doesn’t spread anywhere else from the brain. He is more interested in reading in his garden and petting his cats than going on heroic adventures, and I’m glad that he is able to do just that, with his daughter at his side.

I met up with my irrepressible friend Richard for a glass of wine after work on Wednesday. He chose the resort from the movie “Same Time Next Year”, and we enjoyed the view: 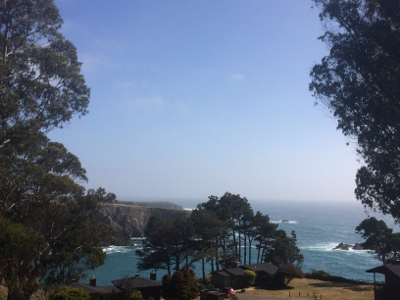 along with a glass of local wine. Richard filled me in on his latest adventures, which included dog sledding in Alaska (“I was literally covered in ice!”) and visiting an ancient Roman amphitheater in Lyon. Up next: Australia and New Zealand.

He also convinced me to work at the jobette at First Friday, which meant I left the house at 6:15 am that morning and got home around 8:45 that night. The shops and art galleries in the Big Town stay open late on the first Friday of each month, dispensing nibbles and in some cases, wine to the public.

At the jobette, we were featuring a photographer from the magical South Coast, who was there to meet the public and talk about his work and inspiration while I poured (but, sadly, did not drink) local sparkling wine, chatted with the visitors, and sold his artwork.

When I walked out to the car again about 12 hours after getting home, it all felt so familiar…

Saturday was busy at the jobette, with visitors asking about Fourth of July events* and other things of a tourist nature. The time flew by, and soon it was time to head over to Lu and Rik’s house for their wedding, which I will tell you about next time. It definitely deserves its own post.

*My father always used to say that England should be the one to celebrate the 4th of July, since as of that date in 1776 they were no longer responsible for America and its many problems, which have certainly not decreased over the last 240 years.

A YEAR AGO: Megan and I were enjoying the fabulous Flynn Creek Circus.