It’s 9:00 am and I have already done two loads of laundry and put them away; made pizza dough; washed a load of dishes; swept the stairs and floor; and finally filed paperwork on my desk and put the files in Rob’s amazing cabinet.

I also unpacked a box of books, including classics like The Poky Little Puppy, which used to be my favorite book as a child. My Dad read it to me so often that he used to read it with the pages facing me, his eyes closed. I never got tired of it. Other discoveries included a book on Queen Mary’s Dollhouse (as fascinating to me now as it was then) and a story John wrote about our cat Jack when she was still a kitten. She is the only surviving cat we had together and I don’t want to think about how old she is now.

While unpacking the books, I discovered a fairly sizable scorpion. Its claws freaked me out, but I swept it into the dustpan and then into the woods, where I hope it stays.

I rewarded this industriousness by going with Megan to the farmers’ market in the Village. I picked up some rhubarb and a fresh baguette: 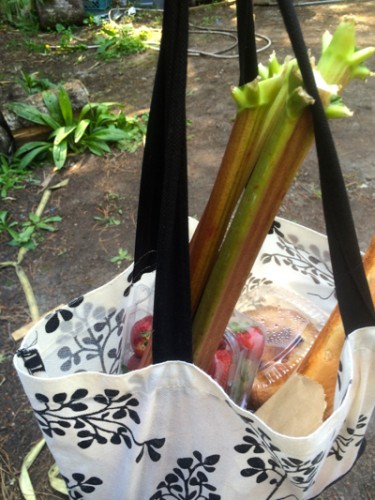 Later, we took the dogs for a stroll in the Village. As usual, Megan took Star and I took Stella, or Stella took me. I discovered that we had many shared interests in common, since she bounded joyfully into a bar as if she were Norm on “Cheers” and went there every day, then into the ocean view bookstore, and then a jewelry store. It was challenging to remove her from these places, and the attention she got from total strangers didn’t help. Stella clearly preferred running a tab, shopping, and petting to walking on the boring sidewalk, and I can’t say I blamed her.

A YEAR AGO: Megan’s giant birthday BBQ, and Erica’s best prank ever!