When my father died, I inherited a 250 year old grandfather clock which has been in our family since it was first made by John Jullion of Brentford. Fun fact: the oldest clock still on public display in Australia was made by the same gentleman in 1770. Rob unpacked our clock after I moved to Hooterville, but it was decorative rather than functional.

At Christmas, Jonathan said that he wanted to get the grandfather clock running again this year. I’m not sure if that counts as a New Year’s resolution, but he (and Rob) can check it off their lists.

Rob shimmed it so it was as straight and true as possible given the irregularity of my house in general and the floor in particular. When the clock was stored, the (very) heavy lead weights, pendulum, winding key, etc. were all carefully stowed inside, so the guys had all they needed to get the old man alive and ticking.

They lifted off the top and got to work: 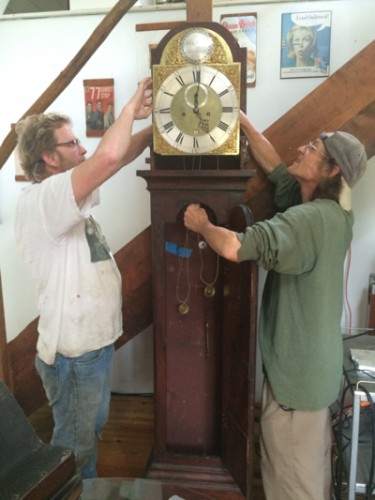 It was nice to watch these two, brothers-in-law for 25 years and friends for more than 40, working together. And soon the clock was ticking the seconds away majestically. They did not install the bell, though. My house is really small and the bell is really loud. When I lived in San Francisco and the clock lived in the hallway and I had a bedroom door to close, it would still wake me up sometimes, so I think I’ll settle for the ticking for now. It’s nice to hear it, reminding me of how it used to make the same sound in my grandparents’ dining room and my parents’ living room.

Before that, the clock lived above my great-grandfather Sydney Smith’s butcher shop in Chiswick. Here he is with my great-grandmother, the redoubtable Elizabeth Harriet*, outside the shop: 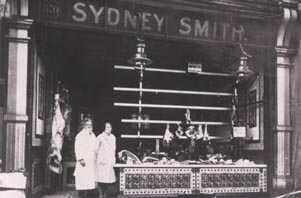 The name was still over the door when I visited it in the Silver Jubilee year of 1977, though it was no longer a butcher shop. Some of the lovely tilework from the interior: 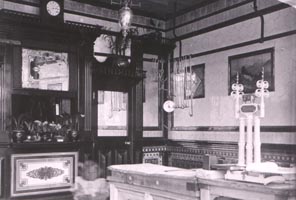 also remained then, though I’m guessing it’s all gone by now. The clock has outlived them all! And it’s gone from a very urban setting to a very rural one. I wonder what other changes it has seen in its long life – and what changes are to come?

*Sydney was a charmer and adopted a laissez-faire attitude towards bill payment by friends and neighbors, so it was up to Elizabeth Harriet to make sure the receivables were received. And she did.

A YEAR AGO: A play from London and a burrito from the Valley.