It was a sunny Saturday morning. My sister texted me that she was teaching a CPR class that day, but was not looking forward to the long drive to town. Even though I was still slowly caffeinating in my PJs, I decided to join her and keep her company.

I tossed some chicken in the slow cooker and threw on some clothes. Even while I was dressing sketchily and leaving the house with no makeup on, I reflected that I would almost certainly run into someone I knew, which proved to be the case.

Megan’s car was preloaded with the dummies and equipment which I had picked up from our friends Lu and Rik on my way home from work the night before, so we jumped in and set off. As you know, I would always rather be driven than drive, and it was nice to be able to admire the ocean and the wild flowers by the side of the road.

Leaving Megan to her class, I took her car to the Company Store, which used to be exactly that: the store where loggers and millworkers bought the necessities of life from their employers: 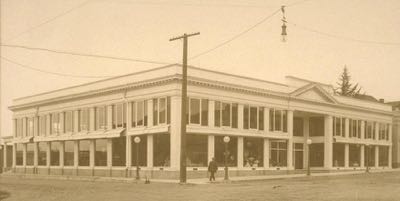 The outside hasn’t changed much, but on the inside, there is free and fast internet to delight the heart of an impatient girl doomed to the slow yet exorbitant horrors of satellite internet at home. In fact, I was so delighted that I failed to notice my brother’s girlfriend Rio until she came over and hugged me. She was accompanied by her daughter, who is getting married here in May. The two ladies had appointments to taste cake, consider flower arrangements and other pleasant wedding-related duties that day. It was nice to see them, and Rio’s daughter will make a beautiful bride.

Next stop was the library, where I both picked up and dropped off books for everyone and paid their fines, because that’s the kind of sister I am. 🙂 Next to me, a little girl was checking out a stack of books, and it reminded me of the long-ago summer Saturdays when we would go to the beautiful library in Bar Harbor: 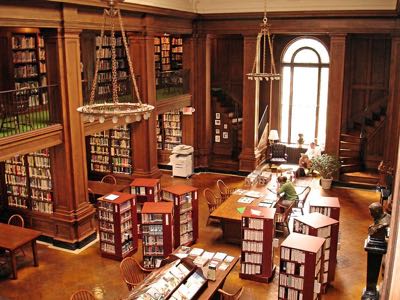 As lab kids and constant summer residents, we were allowed to take out extra books, which was a privilege we always enjoyed. I overheard the same little girl say to her mother, “Of course you can’t see her. She’s in my head,” with a look on her face that clearly said, “Silly grownups”. As Antoine de St Exupéry observed, grownups always need to have things explained. And they usually think an elephant eaten by a boa constrictor is a hat.

I met Megan at her class, where she had been annoyed by Scenario Guy (“What if someone has a seizure in the middle of the road? Do you treat them or go get help?” along with dozens of other what ifs) and Know It All Guy, trying to share his wisdom with the class. At least it was over. We returned the dummies and returned home, where we made chicken enchiladas for dinner from black beans grown on the property and salsa verde made with ingredients also grown there, and the chicken I had thrown in the Crock Pot that morning.

We baked the enchiladas in Megan’s new to her stove: 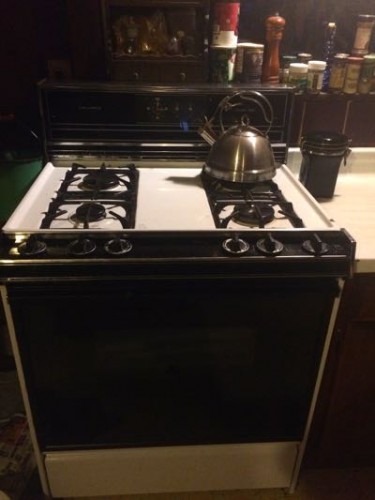 which had been a family affair. Megan’s old stove was pretty dysfunctional, with only one working burner, so when I saw a free stove advertised on the local message boards, I immediately notified the family, who swung into action. Rob borrowed Mark’s truck, and he and Jonathan went to inspect the stove, which looked fine to them. They brought it home and installed it, and I am pleased to report that all the burners and the oven work! Less crappy, my friends.

A YEAR AGO: Some time off before starting my new job. I’ve been there a year today!