I tried to ignore her relentless pounding at the balcony door and the scritch of her claws against the glass of the sliding doors downstairs, but eventually, as she knew I would, I got up, put the outside lights on (go away, monsters!) and let her out in the storm that’s been battering the house since yesterday*, hoping that her stripy, featherweight body wouldn’t blow away. Possibly the wind wouldn’t dare to mess with her, though.

As I turned on the coffeemaker and the heater, I was thankful for the power still being on, a bet I would have lost. The winds were furious and the rain was slashing yesterday afternoon and into the evening. My friend and neighbor Jim said that one of his inside doors had slammed shut because of wind blasting through a dog door. Yikes.

So I went to bed resigned to waking up in the cold and dark, which I did, but not in the way I expected.

Um…thanks for the extra-long Sunday, Audrey?

There’s still a chance of a power outage as another storm is set to rage through here today, but I hope not. March has come in like a lion! 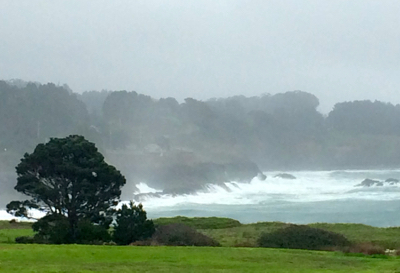 My house has sprung a couple of new leaks, which I will have to tell Mark about. One upstairs, and one downstairs. The exact location of leaks can be complicated by the curved walls/roof.

Outside, the orchid has begun to bloom: 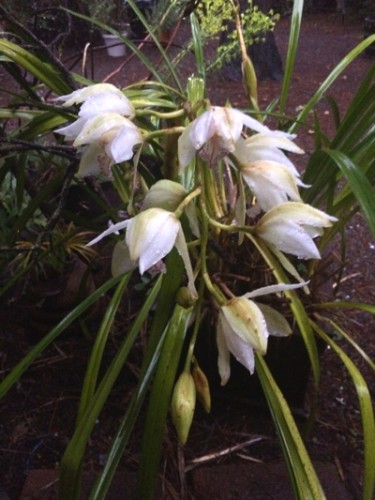 We are a little concerned about the orchard over at the family estate, though. There are blossoms on all the trees, so if the rain and wind blow them off, there will be a lot less fruit this summer. Hopefully our bees have been busy pollinating.

*Just emptied four inches of rain out of the gauge!

A YEAR AGO: March madness, in the hated form of Daylight Savings Time. Maybe all my complaining is finally paying off, because a San Jose assemblyman is planning to introduce a bill to Congress to end the madness. As the Beach Boys would say, wouldn’t it be nice?

One thought on “Early Morning Rain”