I ended a tough week on a high note: meeting a friend for dinner after a mere 10 hour day. I was afraid I’d be late, but I was only 15 minutes late. We hugged hello, and then I ordered a medicinal margarita, doing my little bit to help with the Stage Three water shortage in the Big Town by not ordering water.

Most of the Big Town’s water supply comes from a river, which has been awash in ocean water for the past couple of weeks due to the Supermoon and super high tides, making it undrinkable. That, and the seemingly endless epic drought plaguing all of California led the City Council to issue an edict banning the use of glasses, silverware, and china dishes in restaurants in the Big Town. This order was drastic enough to make the “Washington Post” take notice, way across the country where they have many other things to worry about, like next year’s election, and set off controversy in our little corner of the world (What about the trees? It takes tons of water to make plastic! The visitors will freak out!).

Partly because of the margarita and partly because of the long and tiring week I’d had, I had reserved a room at a hotel about two blocks away. I know the owner and he gave me a great deal, and I was glad I didn’t have to face the long, dark drive to Hooterville.

Instead, I popped a “Gilmore Girls” disc into the DVD player, applied a face mask and eye treatment, and popped open a bottle of wine for a mini spa evening. I used every single pillow on the bed to lean against in luxuriousness, and I slept well that night.

In the morning, I had coffee overlooking the working harbor: 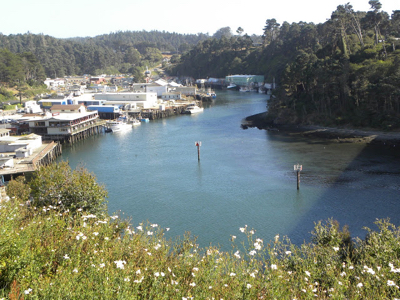 and then ran a few errands, since I was already in the Big Town, and it was nice not having to squeeze them in before or after work. As I drove home, I felt like I had accomplished a lot, and that’s always a nice feeling.

A YEAR AGO: Living in limbo is not fun.