Megan and I caught up with our good friend Lu before she and her boyfriend Rik took off for Central America for three weeks. Rik and Lu are both EMTs, and most years, they go on a mission of mercy to Honduras to provide medical care to villagers living in rural areas with no doctors or hospitals. This year, they decided to take a vacation instead, though they will also look in on their patients, make sure the ambulance is still running, and check on supplies. I am in awe of their courage and commitment.

We met up at the bookstore, which has a stunning view: 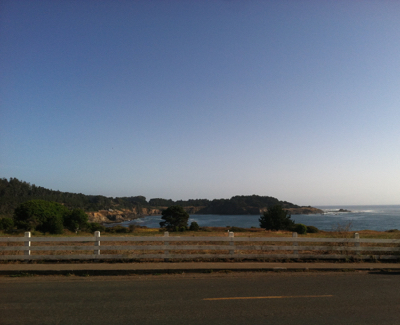 And its own resident cat, the Great Catsby, who was resting up from the exhaustion of dealing with his adoring public (not seen in the picture: a sparkly fuchsia mouse tucked next to his magnificent fur, like a teddy bear for cats): 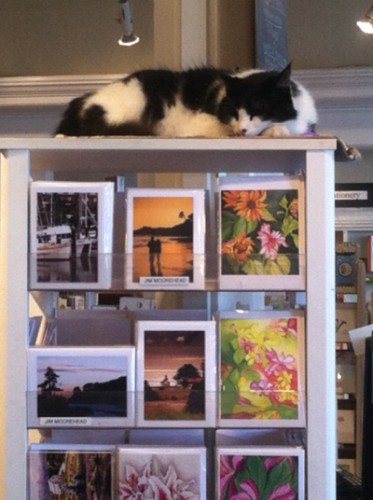 Lu ordered some books, which will await her return, and I made a mental note of some small gifts for Jessica’s Christmas stocking. I know it seems early, but it’s already September, so the festive season starting with the County Fair (in a couple of weeks), then Halloween, then Thanksgiving, then Christmas, has already begun. The Naked Ladies flaunting their pink loveliness by the side of the road tell me that fall has arrived.

We peeked into the pub through its heavy velvet door draperies, and discovered that it was too crowded for us to have dinner, as we expected, so we went to our usual spot, where we scored a table by an open window and admired the artwork on display: 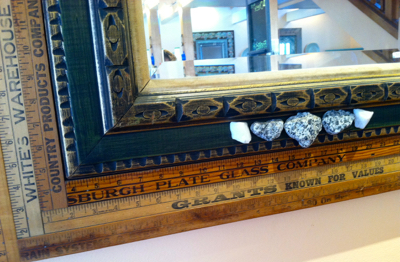 The play was “The Normal Heart”, a moving piece about the early days of HIV/AIDS, when no-one knew what it was, what caused it, how it was spread, and it basically seemed like a huge and sudden plague. Living in San Francisco, I remember this all too well and the many we lost. This lovely remembrance blackboard was in the lobby, and the audience was invited to add their own lost loved ones: 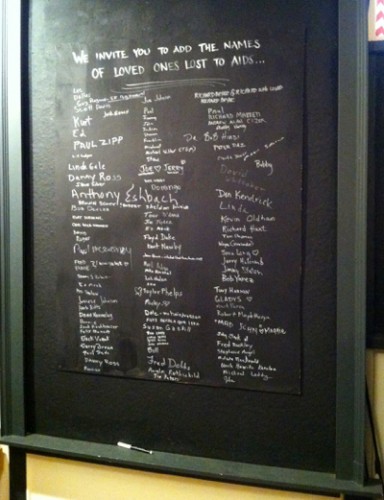 The lobby also boasts a tiny, yet surprisingly well-stocked bar, and a creative bartender who creates a signature drink for each production. This one was Pride Punch: vodka and triple sec shaken with ice, poured into a glass, and then cranberry juice poured slowly over a spoon until the drink blushes: 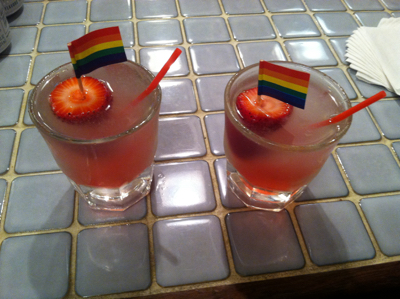 I said, “Come for the drinks, stay for the play,” and the bartender said that there are many people who do come there just for the drinks. I stored this valuable information away for future reference.

A YEAR AGO: Little Miss Lupe, my workout partner, came into my life. Also the MacBook I’m merrily typing away on. Sometimes it seems like September really is the new year, just like when you’re a kid.