I lent Wednesday to a friend who was making the trek to Santa Rosa last week, so I drove the 30 year old Honda for a couple of days. It was a whole different experience from driving a seven year old car. You lock and unlock the car with an actual key, and you roll down the windows with that thing at the end of your arm – you know, your hand. So you can actually roll the window down (or up) with car off. Such freedom! I also enjoyed the total lack of tinting on the windows, allowing for the luxurious use of the rear-view mirror. I felt like I was driving around in a fishbowl. When driving Wednesday, I rely exclusively on the side mirrors. I keep meaning to get the tinting removed, but haven’t gotten around to it. I probably should before the darkness and rain of winter descend.

I definitely missed my Ford* when dragging my butt up steep, curving hills. The Honda can do it, but it lacks the power and strength of Wednesday. And it’s not as power assisted, either, though the boys recently spent way too much time tearing it apart and replacing the brakes, which are notably brakier. As my brother said, the most important thing is that a car can stop (I thought it was that it could go, but as so often happens, I was wrong).

This reminded me of my 1966 Mustang convertible, Josephine**. She was light metallic blue outside and blue inside, with a white top that was only up when it was actually raining. I’m sorry to say that I was guilty of driving with the heat on and the top down back when I lived in San Francisco. Josephine liked to go fast. You could tell that she was happiest when going 60 mph or more, and she had a very powerful engine. But she did not have power brakes or steering, so when stopping on the San Francisco hills, I would practically have to stand up to press the brake pedal hard enough not to slip backwards. And when I drove up here to visit my sibs, along the legendarily curving highway, it was a real workout going around the curves.

UPDATE: John’s pack rat-ness pays off again! Here’s a photo of Josephine (at the place I bought her in Southern California): 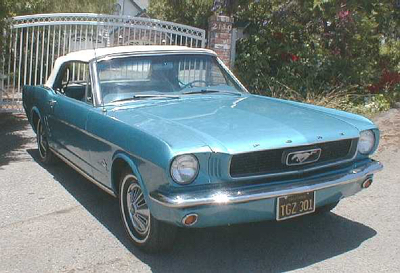 **Named for my equally beautiful and equally long ago Siamese cat Josephine. Her eyes were the same color as the car (or vice versa). Oddly, I can’t find any pictures of the car, and all the links in my blog are broken, so you will have to use your imagination or the Google to see what the car looked like.

A YEAR AGO: At the theater with the girls, enjoying “The Graduate”.

7 thoughts on “Past & Present”