It’s the middle of September, and you know what that means: time for the County Fair!

I left work early on Friday afternoon, picked up Megan, and set off fairwards. It was a postcard day, with not even a wisp of Karl the Fog* over the shining blue Pacific as we wended our way through the eternal redwoods and into sunny Anderson Valley.

When we lived in San Francisco, one of Megan’s many gifts was being able to get a taxi anywhere, any time. This talent has been modified over many years of country living to always being able to find a parking spot** (and a sort of ESP when it comes to California Highway Patrol, an ability that has undoubtedly saved her many tickets over the years). Fair Day was no exception, as she neatly parked Wednesday about a block from the fairgrounds.

We texted Erica on arrival and found that she was also there, so we happily met up in the floral building, where there was a Suzy theme going on, including pinkness and whimsy: 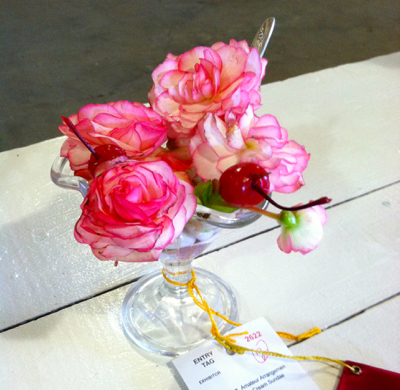 accessorized by glittery silver shoes. On a silver platter, no less! 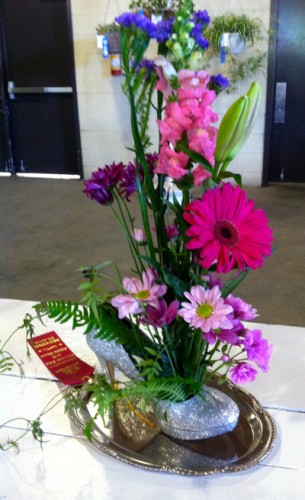 The glamor theme continued in the livestock area, with fashion forward fowl whose outfit I coveted: 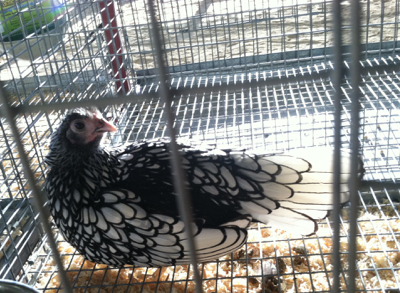 and glamorous goats with glitter signs. We even got to pet the world’s softest bunny, belonging to a very young and very poised 4-H girl. 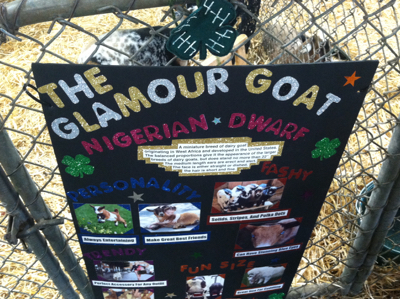 In the agriculture building, it soon became clear that both the wildfires and the drought had taken a serious toll. The “biggest” pumpkin in the weigh off this year was a mere 200 pounds: 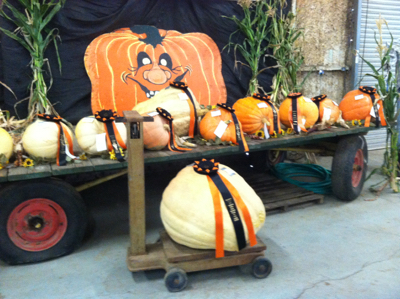 compared to last year’s 700 pounder. There was very little produce on display at all, other than apples and grapes. I wonder if this is the beginning of a new era.

It was a new era Jessica-wise as well. This was the first year she spent most of her time with her friends instead of her auntourage. In case you’re wondering: I chose not to embarrass Jessica by taking her picture when she was with her posse. I know this is the way it should be, but it makes me a little wistful about time passing and how she is no longer a little girl. Indeed, her curves are kicking in, despite her model slimness, and it was alarming to observe the effect she had on the male population. To be fair, she was wearing sunglasses, so they couldn’t know how young she was, but yikes. Fortunately, she has a good head on her shoulders and a smart mama.

Megan and I enjoyed strolling around the fair with Jessica’s smart mama. She has recently acquired two cattens (not quite cats; not quite kittens), a long-haired black female named Hecate and a short-haired grey male named Man Ray. They are rescued litter mates. I must go and meet them as soon as I stop working on Saturdays.

So it was kind of a skimpy fair this year, but we still had fun. I always have fun with Megan, Erica and Jessica.

*As I write, it’s 86 heinous degrees in my living room. I think Karl needs a nice, relaxing visit to the Mendocino Coast. He can be seen here hanging out in my old ‘hood: 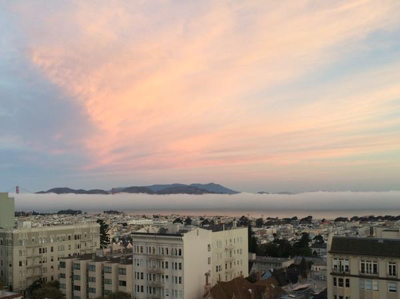 **Sometimes this has backfired on her, though.

A YEAR AGO: At the Fair, of course!

One thought on “Fair Suzy”