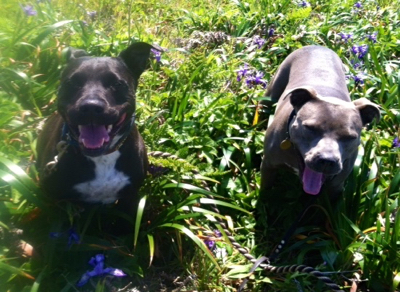 Megan pointed out a shocking oversight in my blog: I never told you that she and Rob officially adopted Stella!

You may remember that Stella came into our lives at the puppy tail end of 2013, when Monica heroically agreed to find homes for two year old Stella and her 11 (yes, 11) puppies. Being Monica, she somehow managed to finagle a free room at one of the loveliest resorts on the coast as a nursery, and also found homes for all of the babies.

Megan and Rob agreed to take Stella on a trial basis, partly because Star is, as Megan puts it, “dog selective”, and partly because their hearts were still broken over the loss of their beloved Schatzi. It turns out that Stella and Star are a great match, and it’s good for Star to have another dog around again. Star, like me, can be nervous and unsure, but Stella just barges right into life fearlessly. Nothing bothers her, and she does everything 110%, 110% of the time, whether it’s sleeping, eating, or playing.

The other day, Megan stopped by to see me at work while Rob was at a doctor’s appointment, and brought the dogs with her. Stella was almost as happy to see me as Star, and I’m convinced that I have extra credit with Star because I was there with Megan when Star was rescued from her bad old life. Stella is definitely part of the family now, and it just goes to show that dogs choose us, not the other way around.

Star turned seven on Cinco de Mayo this year, marking her fifth year with Megan and Rob. I bet she doesn’t even remember the bad old days, and it’s so nice to see her cuddle up with Stella, two happy dogs in a happy home.

A YEAR AGO: A field trip with Megan and Stella.