Poor Change! No-one loves you, including Me.

Especially when it includes working five days a week. It’s been fifteen years or so since I did that, meaning that I was younger and, as Jessica put it when she herself was much younger, “fresher*”. I also did not have to drive more than an hour a day to do it (in fact, my car problem then consisted mostly of finding parking for my 1966 Mustang convertible, Josephine). And I had a wonderful cleaning lady who came every other week and cost a mere $50 a pop.

Alas, none of these things are still the case, so I’m leaving the house around 7 am and getting back around 5, if I’m lucky. Unfortunately, the person I now work for is a night owl and tends to get to work around 10, whereas my preference is to get in early and get it over with, so I’m hoping we can find something that works for both of us.

Having said that, though, she is very nice, and I actually have an office again, though it is a mess: 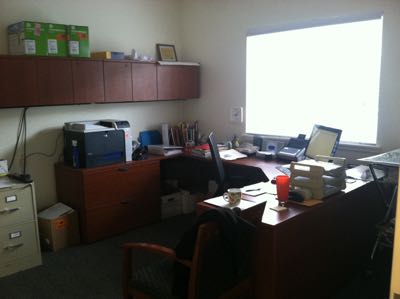 I am hoping that I can bring some order to the chaos and prettify it soon.

One of the things about working at a medical facility, even in administration, is that you have to be up to date on your immunizations. They scheduled me for a series that is required for all women under 40, and when I revealed the Awful Truth, they revised it to a blood test to make sure that I was immune to whatever these things are.

So I went over to get my blood taken, but the Calamity Suzy Factor made sure that it did not go as planned. It turns out that my veins are the only things about me that are not shallow, so the poor nurse spent a lot of time prospecting for a useful one with no result, much like a botched execution. Also? Those tourniquet things hurt. I don’t know how junkies do it.

As the search continued, I began to feel a little light headed and then nauseous, so the search was called off. The nurse gave me juice and peanut butter crackers and sat me by an open window until I felt better. To be fair, I hadn’t eaten in about 16 hours, but it was still a little on the embarrassing side. She was really nice about it, and apparently we will try again another day. Wish me luck!

*When Jessica was small, she noticed the difference in the energy level between Schatzi and my mother’s much older dog. Megan explained that Schatzi was younger, and Jessica nodded, saying, “Schatzi is much fresher!”

A YEAR AGO: An evening at the theater.