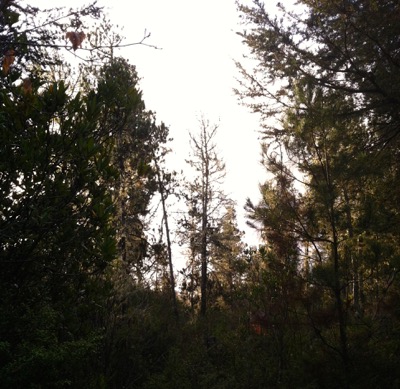 The rain kindly held off on Thanksgiving Day, even giving me enough time on the day after to move the buckets of wood for the outdoor fireplace under cover and to put the hanging plants out to get a shower. I had just finished all this when the rain began to fall and the cats came running back inside.

As I tidied up the house, I wondered why I had bothered tidying the day before. After all, I knew the house would be a mess the day after, even with people washing dishes as we went along the feast preparation road. It’s just one of those things about having a really small house and a kitchen that is undersized even by Manhattan standards. I guess I want to act like I am tidier and more civilized than I really am.

Erica and Jessica arrived bearing gifts: wild mushroom tartlet appetizers; three different kinds of cranberries (chutney, made with figs and quince; relish; and shrub, which you will hear more of later); rolls; and a spicy pumpkin pie, truffle-like in its utter richness. Oh, and a meat thermometer.

I had put Turkzilla in the oven about two and a half hours prior to their arrival, and applied foil after its initial hour in the oven because of the undue brownness. Erica opined that I had unwittingly fast roasted it at 400 degrees in foil rather than roasting it at a slower, more civilized pace, and that all 22 pounds of it might in fact be cooked. The meat thermometer claimed it was, though we turned the oven down dramatically and left it in there a couple more hours just to be sure. It looked pretty good: 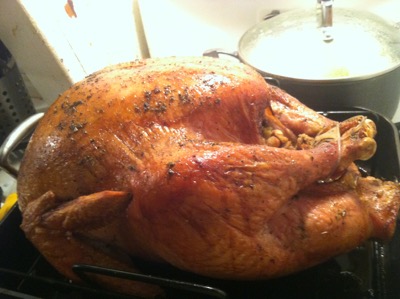 After the turkey crisis was handled, I showed the girls my new bathroom, which Jessica pronounced “much improved”. I think Rob should make a little plaque with his initials on it and install it near the baseboards somewhere. An artist should sign his artwork.

Erica went to hunt mushrooms for dyeing (and found a bag’s worth of different hues), so Jessica and I explored my jewelry box, which mollified me after the rejection of my jewelry in the big city. Jessica thinks my jewelry taste is impeccable, and accessorized me for the evening with a string of jade beads my father brought me from China, my mother’s moss agate earrings, and a turquoise pin that had been my grandmother’s. She accessorized herself with my moonstone necklace: 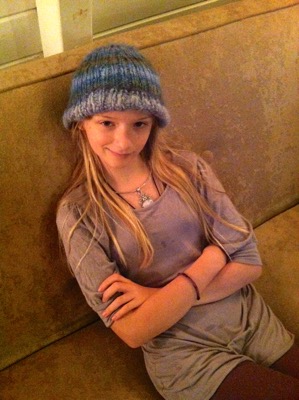 When Erica came back from foraging, she made magical cocktails in my grandmother’s wine glasses with the cranberry shrub. Shrubs date from Colonial times (how Thanksgiving is that?), and are sweetened vinegar-based syrups that can be mixed into soda water or other fruit juices. Erica mixed it with clementine soda and added vodka to mine for extra fun: 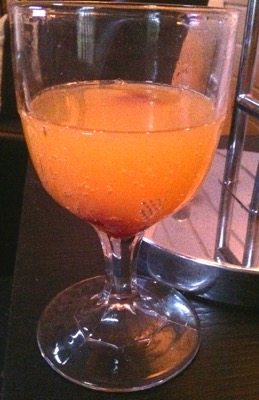 I couldn’t resist eating the pickled cranberries in the drink – delicious and intense!

Lichen arrived with the happy news that he has found a new house and mostly moved into it. He said that it looks like a two story wine cask, and it’s just a few miles south. Though it doesn’t have a kitchen, the owners have invited Lichen to design an Ikea kitchen which they will then have shipped up from the Bay Area. Apparently, you can design it on a computer and see how it will look, move things around, etc. before your landlords buy it for you. I’m so happy for Lichen, and we are planning go over and check it out next weekend. I was also pleased to hear that Michael found an affordable place in Hooterville. Maybe things really do work out for the best.

At the end of the evening, Megan and I sat chatting by the fire with a last glass of wine, and I thought that I actually feel more thankful now that the future is so uncertain, rather than less. I am rich in family and friends who are family, and I know that whatever happens, they will do their best to help me, and I will never really be alone. I have a lot to be thankful for.

A YEAR AGO:
Thanskgiving prep.

2 comments on “Thanksgiving Wrap Up”