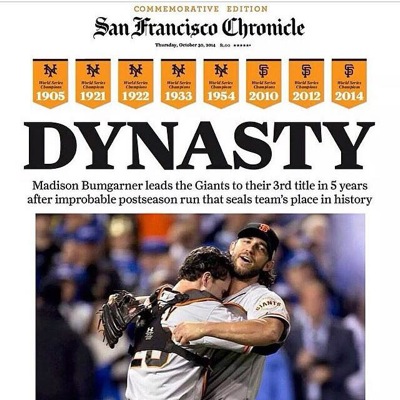 The Giants won their third World Series title in five years on Wednesday night. Above, you see Buster Posey, the team’s valiant catcher, my favorite Giant, and owner of the best name in baseball, hugging pitcher Madison Bumgarner, the stoic country boy who is now a hero and a legend.

With all the stress in my life lately, it’s been hard to watch the World Series. I love it, don’t get me wrong, but the anxiety is tough in my weakened condition. The Bumgarnerless night before the Giants’ victory, they were smoked 10-0 by Kansas City in Game 6, and I had to stop watching after about the third inning because I just could’t take it anymore.

Last night, the Giants scored two runs, were tied by Kansas City, and then Joe Panik (the second best name in baseball) made a crucial double play. Pablo Sandoval, the beloved big bear known as The Panda, made what would become the game’s winning run with a mighty swing: 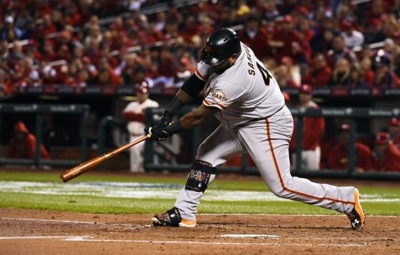 Despite his size, The Panda can run as well as he can hit, and as if that weren’t enough, he also caught the last out which won the Giants the Series. He lay for a second on the grass, where he had dived to make the catch, before being swarmed by his teammates who lifted him up and carried him into the joyous knot of players surrounding Bumgarner, the calm, unruffled, 25 year old hero of the Series.

Bumgarner pitched this epic Game 7 just two days after pitching a shutout game. His father was asked if he thought his son could pitch again so soon, and he replied, “I didn’t know if he had enough left tonight. But I did know that boy would try to steal a steak off the devil’s plate.”

Here’s to the Giants dynasty, their fans, and the beautiful city they call home. And next season!