Clyde appeared with a bird in his mouth, and I went to take it away from him, surprising both him and the bird and letting it out of Clyde’s mouth. The bird rocketed up into the redwoods to our mutual relief.

I had barely recovered from this close brush with death when Roscoe trotted into the living room with, you guessed it, a bird in his mouth. Again I rescued the bird, and again it flew away quickly and happily. Sometimes when I get birds out of the cat’s mouths, they sit there kind of stunned and I’m not always sure they make it. It was great to know they escaped unscathed, at least this time.

After the avian escapade, Clyde settled next to me on the couch, looking like a little angel and snoring softly: 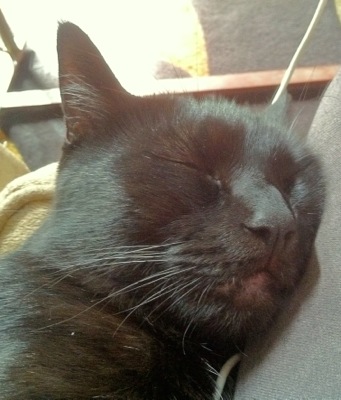 It’s hard to believe that he was a murderous, bird-killing machine only moments earlier, isn’t it?

Over the years, I have grown to care about these people. Together, we have gone through a family member’s successful battle against cancer; the birth of a first child; another child’s 4-H ribbons, yet another being accepted to an Ivy League school and a graduation from West Point. I’ve heard about family reunions, marriages, and promotions, and we’ve congratulated each other on World Series bids and wins. I valued our partnership both personally and professionally, and I can’t believe I will never talk to these folks again.

But we have had to hand everything over, and with a lawsuit pending, we have to be careful what we say and who we say it to.

I feel much the way I did when John and I divorced. It was a great loss, and I was saddened by the end of something I went into so optimistically and hopefully and which I thought would last forever. I’ve been spending a lot of time beating myself up for poor decision-making and ending up with no money at a semi-advanced age, but I am proud of what my boss/partner and I achieved together over a decade. We tripled our client’s money in three years, kept the pension fund fully funded through the 2008 market crash and the city’s bankruptcy, and were employers in that embattled state and city. We sponsored an annual golf tournament which raised thousands of dollars for scholarships for needy children of that city. And we did it all with integrity, passion, and caring. We have a lot to be proud of in the face of defeat.