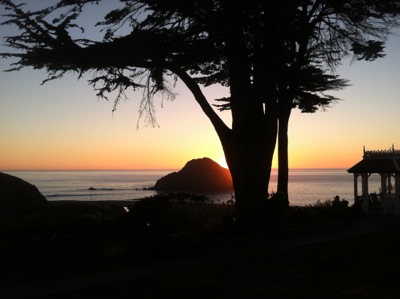 Just because you’ve lost one job doesn’t mean you shouldn’t keep doing the one you still have (at least for now). So Megan and I headed down to the beautiful south coast to distribute jobette related materials.

It was a beautiful day, hot by our standards, with not a cloud or a wisp of Karl in sight. September and October are often the warmest and least foggy months in our part of California, and it was probably around 80 degrees, even at the coast, where it’s usually in the 60s, even in the summer.

Since it was late in the day, Franny’s was our first stop (with ten minutes to spare before they closed). Megan got a spicy Mexican mocha for herself and a bag of gummy body parts for Jessica’s Christmas stocking. What says “Christmas” more than squishy, edible people pieces? Here’s look at Franny’s less alarming delicacies: 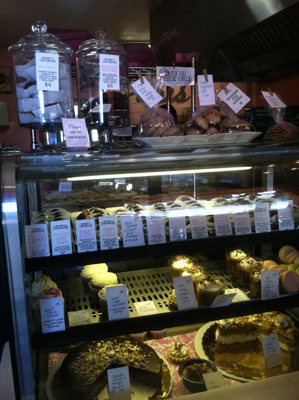 We stopped in at the feed store across the street on non jobette business: a) to get cat food for Megan’s kitties; and 2) to ask the store owner if we could post a Stella flyer in the window. The owner took one look at Stella’s smiling face and said that she has a good friend whose beloved dog passed away last year and was thinking of getting another one. This person has had nothing but pit bulls her whole life, so she is very knowledgeable about the breed.

Megan sent the store owner some photos and video of Stella and has since made contact with the potential adopter. They will meet in person soon, and if all goes well, Stella will have a new home with 45 fenced acres and another dog to play with, which should be perfect for her. Stay tuned!

Of course, we also had to stop off at Anchor Bay for fabulous Thai food. Amusingly, although we ordered separately and I knew ahead of time what I was getting and Megan didn’t, we ended up getting the same thing (orange chicken; Panang curry; cucumber salad). Great minds think alike. It was really fun to have Megan there with me, and she was a lot of help wrestling boxes and brochures.

As we came around a steep curve, we suddenly came across a cow standing right by the road. I don’t know who was more surprised. The cow seemed to be making up its mind about something, and Megan floored it as much as you can when driving a corkscrew downhill. As she drove, she explained that cows can ram your car repeatedly, and cause quite a lot of damage which is not covered by insurance. I’m still learning the finer points of living in the country, it seems.

The cow didn’t follow us, and it reminded me that this was the second time Megan’s quick thinking had saved us on the south coast. Last time, she pulled the car out of the way of a maniac who had crossed over into our lane in order to pass someone. While coming over a hill with no idea we were there. Fortunately, Megan has quick reflexes and calmness in a crisis, unlike her sister, and pulled over to safety where we both caught our breaths for while, glad we still had them.

You’d think we saw each other all the time, living about 100 yards apart, but we don’t, so we have to make time when we can, even when it’s work related. It was hard to feel like it was work to drive beside the ocean and through the redwoods together, though. I’m lucky that my sister also happens to be my best friend.