Before the play, Megan and I met up with Lu at Frankie’s in the Village, where we sat outside to enjoy our chicken pesto piadines (basically a big salad inside a flap of flatbread, and impossible to eat daintily, at least by me) and a bottle of local, organic wine: 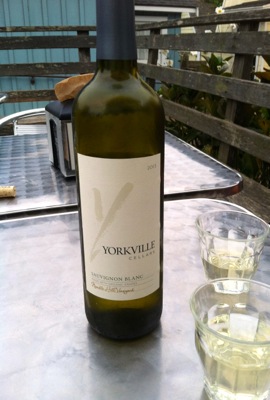 It was from Yorkville Cellars, where I stopped in to drop off some jobette-related materials but didn’t drink the wine, even though I wanted to, and which, it turns out is delicious.

We had a lovely time messily eating our salad sandwiches and catching up on each other’s lives, though it was strange to be there without any dogs. Frankie’s owner has her own rescued pit bull, and welcomes dogs of all kinds on the patio of the restaurant. One of the things I love about this county is how dog-friendly it is.

After dinner, we made our way to the theater, which was lit up festively:

We picked up our tickets at the box office, and settled into our seats. The play was directed by one of the dancers from the burlesque show I enjoyed last year, and speaking of dancers, Lu’s niece played the stripper in “The Graduate”, doing a wonderful job with wit and style. She is part of the same burlesque troupe as the play’s director, and is also a fire dancer and belly dancer, so you can imagine that the girl has moves!

The cast was all great, especially Benjamin and Mrs. Robinson, who followed the tradition started by Kathleen Turner of courageous full nudity on stage. The drama and comedy of the film were beautifully captured, and of course the soundtrack is fabulous. It was a wonderful evening with two of my favorite girls.

3 thoughts on “The Graduate”