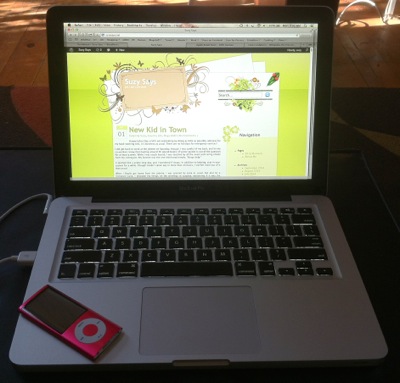 It was obvious for a while that my old MacBook needed to be replaced, but both my resistance to change and innate cheapness meant that I didn’t do anything about it for quite some time. Finally, I decided to ask my boss/partner for the price of a new Pee Cee and pay the remainder to buy a new MacBook. To my surprise, he offered to pay for the whole thing, even when I informed him that the terrifying price tag, including Apple Care and other what nots, was around the dizzying $1,700 mark.

Needless to say, it took me a while to figure out the new operating system, including a couple of calls to Apple to help with questions on email (solved) and iPhoto (it appears I am stuck with the stupid “events” set up, rather than the library format I’m used to). I also hate the super wide tabs in Safari and have so far been unsuccessful in getting rid of them, even after trying Glims, though I have removed the icky Top Sites thing and annoying hot corners. However, the track pad seems to make pages move from side to side from time to time for no particular reason that I can discern.

I have also noticed that the silvery surface shows fingerprints readily, which I always imagined would also be a drawback on the stainless steel appliances that everyone apparently finds so desirable. Still, it’s a big improvement over the old one as far as speed and capacity go.

I was trying to remember when I got the old one, and I’m pretty sure it was about eight years ago, which is antique in computer terms. I got my Product (RED) iPod at the same time. Looking back through my dusty archives, I’m surprised that I didn’t write about buying it at the Apple Store on Fifth Avenue, which looks like a floating glass box: 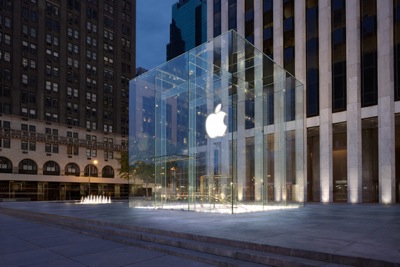 It’s right across from the Plaza Hotel, Eloise’s fictional home and my spiritual one, and near Robert Indiana’s iconic LOVE sculpture: 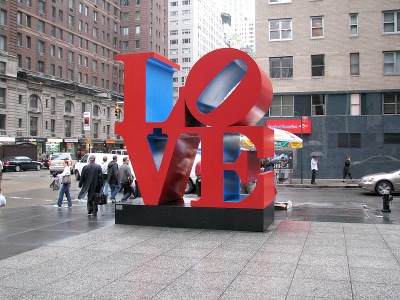 I love(d) it, even though it only has 8GB of memory. Despite a lot of use, it remains a shiny metallic red. But it began to sound like the singing was underwater, and it didn’t hold a charge very long, so it was time for a new one, which, as you can see, is fuchsia and shiny. Almost as good as red. And it has 16 GB of memory. That’s a lot of music for those long drives!