I’m still on the couch, but I’m getting better. The Magic 8 Ball and I are both pretty confident that I’ll be able to go back to work at the jobette on Saturday. I’m all set up, with pills and water close at hand, along with phone and TV remotes, all the better to watch Daria with, my pretty. It occurs to me that Erica is much like Jane Lane. Also, is it wrong that I have a crush on Trent? I mean, he’s a lot younger than I am. Also, he’s a cartoon, so our relationship is probably doomed.

From my vantage point on the couch, it has come to my attention that Yellow Cat seems to think that he is now a semi-regular member of the cast, rather than a cameo as I thought. My lack of mobility has impeded the shooing process, but I have twice ejected him from the studio, where he was chowing down on cat chow with an air of entitlement that I found disturbing. I also caught him peeking in the living room door, and he didn’t leave until I levered Self off the couch, tossed the blanket aside, found my sandals, and lumbered out into the garden, carefully avoiding the construction materials spread around in order to avoid yet another Calamity Suzy episode. Later, he was hanging out in the sun by the new tree, and I’m sorry to report that I turned the hose on him, Grinch Girl that I am.

I never thought I’d be the kind of mean old lady who soaks neighboring cats, but he started it by fighting with my cats. Fortunately, they seem to run into the house and avoid YC as much as possible, so even if he is here eating all their food, he isn’t clawing them to pieces, so maybe this is the compromise we’ll all have to live with. And you know what a compromise means, kids: it means nobody’s happy. 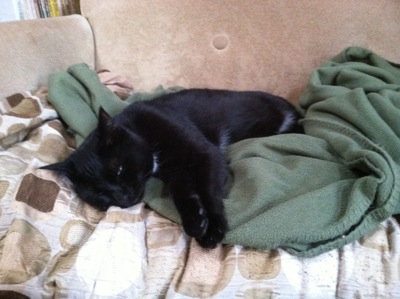 Roscoe took advantage of my relative immobility and flexeril induced carefree attitude to get a drink on the counter, which is normally forbidden territory: 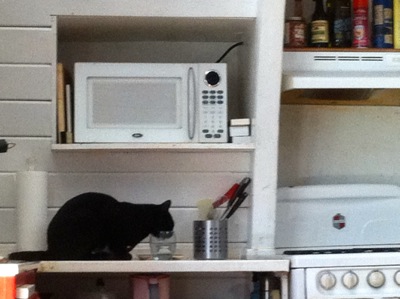 Meanwhile, outside, Audrey was keeping an eye out for Yellow Cat and any other would-be intruders: 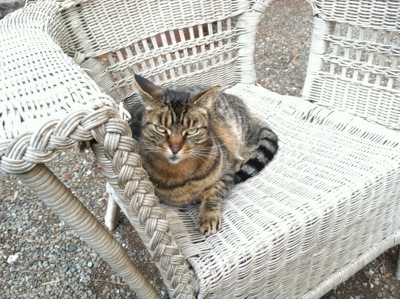 Who needs locks for their doors when they have Audrey and The Glare of Death to keep trespassers at bay? Except of course for Rob, who brought me frozen pizza and ice cream and worked a bit on my bathroom, keeping the invalid company. Even Audrey loves Rob.