I am marooned on my couch, hanging out with the lower back pain that showed up like an uninvited guest around dinner time yesterday and has refused to leave ever since. I have texted my boss at the jobette to let her know that I am not coming to work, and Megan to let her know that I have somehow damaged Self and could use some first aid after she caffeinates.

I’m not sure how I managed to do this, unless it was my unwise attempt to carry the outdoor table upstairs and onto the balcony. The plan was foiled by physics, since the curviness of the roof means that neither the glass door nor the screen door can be pushed back far enough to inveigle the table through the balcony door.

I puzzled ’til my puzzler was sore and Rob showed up. He assessed the situation and opined that making a pulley out of ropes and hauling it up that way was the way to go. Then he took the problematic table back downstairs.

He had not come over to solve my furniture problems or even work on the bathroom, but rather to bring me a tree.

Ever since I moved up here, Rob and Megan have been planning to give me some trees in preparation for moving over to the family property. The trees are planted in giant containers owing to the poor quality of the soil around here, making them hard to move, especially if their roots have grown through the container.

But when there’s a Rob, there’s a way, and now there is a big green Japanese maple (complete with mini helicopters and Clyde on the right): 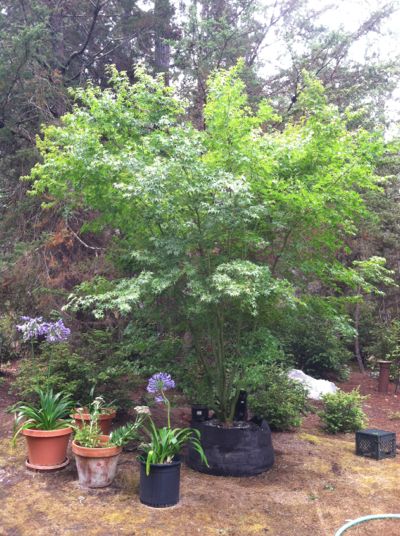 Rob says that the tree will be traumatized, since he had to cut some of the roots to move it, and that I should water it carefully. I hope it survives its transplant and will be happy here.

I haven’t done anything in the garden this year because of the drought. The beds by the shed in the front of the house are empty, and other than replacing the geraniums which were killed in the frost in December, I’ve just been trying to maintain what I have and try not to feel guilty about watering once or twice a week. So far so good as far as the well goes – let’s hope it keeps going well!