So far, I’ve successfully gone two nights with the slowly improving bathroom exposed to the elements.

Rob removed the old door and started to frame in the doorway for the new door, which is narrower: 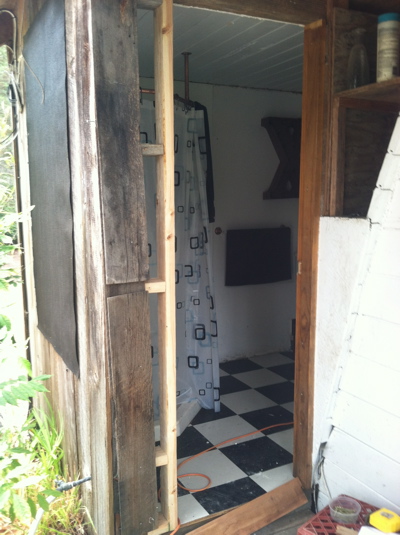 The new door also needs to have a hole drilled in it for the lovely doorknob set. As you can see, it’s shiny and beautiful after its sojourn in the Rob spa: 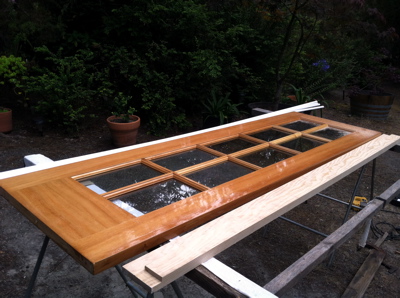 Maybe sanding and varnishing are the door equivalent of microdermabrasion for people.

Rob hasn’t had time to finish the door installation yet, so in the meantime, I’ve had to be cautious about facility usage during the dark and dangerous night hours.

I’ve been leaving the lighted X on to discourage skunks and other unwanted visitors from partying in there, and when I do, I put on the light on the back porch by the sliding glass doors. Then I can check for potentially escaping cats before heading back inside. To quote Alex from Happy Endings, “I’m not as dumb as I am.”

So far it’s worked, but I have to admit I’ll be glad not to have a hole in the house one of these days. Also I’m dying to see how the new door looks when it’s installed. Rob thinks it will make the room look bigger as well as brighter.

It occurred to me that we have shopped local(ly) for everything other than the X, and even that came from San Francisco, less than 200 miles away. And that we have spent very little. Rob bought the medicine chest for $7 and the floor tiles – all of them! – for $6 at a thrift store. The towel rod and lighting fixtures were found and rehabbed, and the copper pipes for the shower rod were found in James’ vast collection of things and stuff. The door and its accessories were the highest ticket items at $200, but were bought just a couple of miles from my house. Other than that, we bought a basket of sundries at the hardware store, and that’s it.

It’s amazing what can be done with ingenuity and skill – Rob’s, anyway! 🙂

*Now I have that Counting Crows song stuck in my head.