Here’s look at the vent he constructed for the bathroom fan: 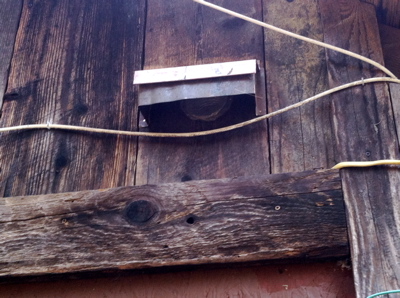 As you can see, the hole with the mesh is protected by a little copper “house” Rob made, and in turn, it’s protected by the eaves of the house in case it ever rains again. The fan seems to be quieter now that it vents outside, though I could be imagining things.

Inside the house, the glass towel rod has been installed: 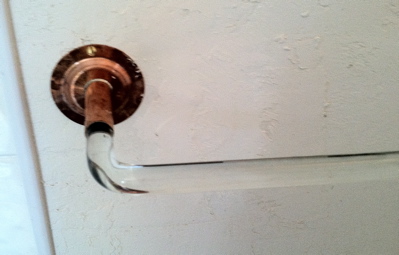 Rob found it at the dump, removed the paint and dirt from the 60 year old glass, and replaced the battered metal ends with copper ones he made. I think it’s gorgeous. Almost too nice to cover up with towels!

He also got a medicine cabinet at a thrift store for $7. It fit almost perfectly into the space of the old one, other than a tiny crack which Rob filled in while I was away.

He also hung up a letter from an old movie marquee in San Francisco: 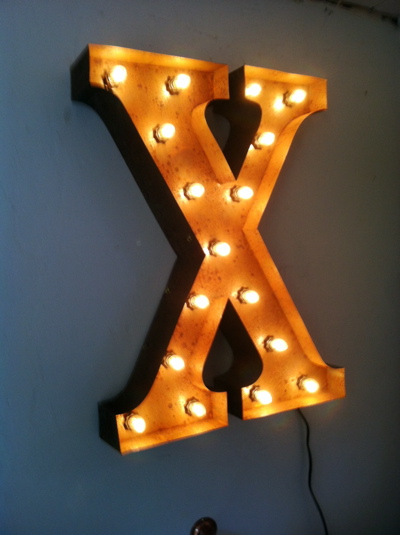 I love it, and it casts a beautiful rosy light, as well as going nicely with the copper fittings. This was my find, and therefore more expensive, like the door, which is currently being worked on in Rob’s workshop and cabaret: 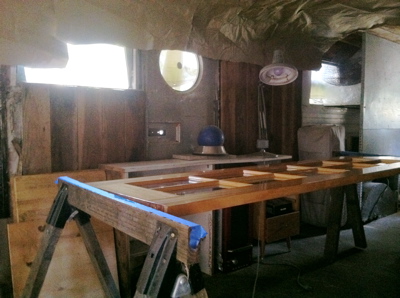 This is an old Airstream-type trailer beside my house, which Rose used to store her pottery equipment. Rob moved in a stand to hold the door, some lights, and a heater, and closed up the front with a heavy duty canvas tarps. It’s like a nightclub in there: dark, smoky, and exclusive.

The door apparently required much sanding (some with machinery, some by hand) and coats of varnish, and it’s just about ready. Before Rob installs it, he’s going to install moldings and baseboards, and I think paint the bathroom, since he can’t stand it. I’m considering painting the bathroom door to the hallway shiny black and getting new knobs from our neighboring window and door emporium down the Ridge, but that’s about as far as I’ve gotten.