Even way out in Hooterville, you just never know what will happen…

On Monday, I left home early to get yet another check-up for Wednesday. Her sullen teen years, like most kids’, have not been that great for the grown ups in the picture, no matter how faux. It seems that I will have to take her to a Ford dealership in the county seat, but I’m taking the Scarlett on that for now.

After that dispiriting news, I went to the jobette only to be greeted by all my co-workers. Don’t get me wrong: they’re always glad to see me, but they rarely are hanging around en masse by my desk, which is, as we know, where all the magic happens. They also had news: a car accident (later reports said a truck) had taken out some fiber optic cable just south of the Village, and surprisingly, this had removed all internet access to the Big Town.

We had no email or internet or phone and couldn’t sell anything either, since the cash register and credit card sales machine use the same system. So I made a sign, posted it on the door, put out the garbage and recycling for pick up this morning, locked the doors, and went back home. A snow day!

On arriving home, my snow day lost all its fun as work reared its ever ugly head. One of the good (or bad) things about having terrible satellite internet is that it’s not interrupted by the hiatus of the otherwise speedy and unlimited internet that others enjoy. It was its slow and expensive self, allowing me to work at my other job whether I liked it or not.

My boss/partner also – stop me if you’ve heard this before – has to attend his aunt’s funeral in Virginia (that makes five in the last three months), so is heading to the airport as I write. He had to reschedule our meeting, planned for Thursday, to today. So instead of working at the jobette and then driving to the San Francisco today, I drove to Oakland instead.

I don’t think I’ve set foot in Oakland since I left almost five years ago. I met Adrian across from City Hall, built exactly 100 years ago: 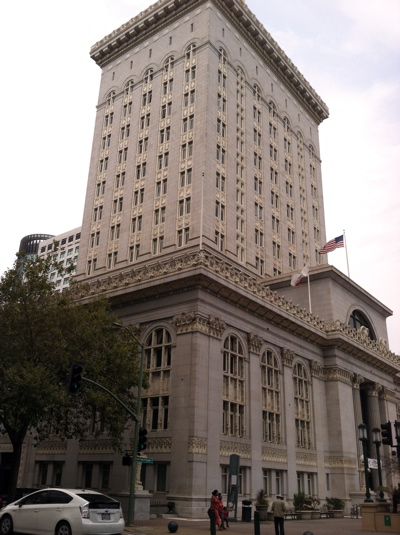 Here’s the Tribune tower, built in 1906, the year of the Great Quake: 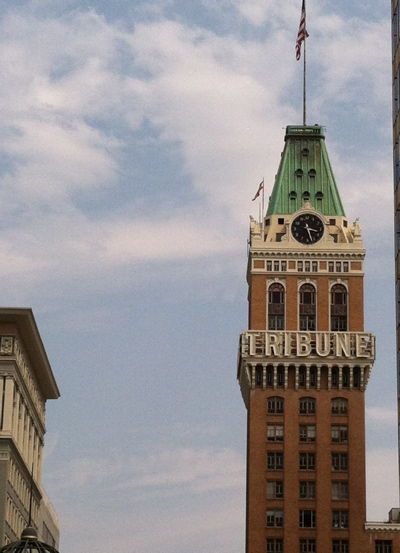 Sadly, it is no longer a newspaper, but the tower still looks beautiful and is a landmark, especially when lit up at night.

I have to say that what little I saw of downtown Oaktown looked pretty good. Ditto the traffic wending my way back across the new and improved Bay Bridge toward Civilization. Though it had been a long day. Tonight: Thai delivery and the Giants game. Tomorrow: Meetings starting at 8:00 am.