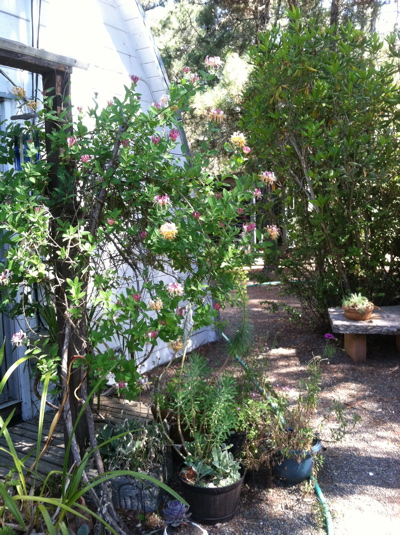 As you can see, my birthday dawned bright and beautiful. All the doors are open, and scent from the honeysuckle bush is wafting in. There seem to be more flowers than ever this year, and the hummingbirds are buzzing around it all day.

Yellow Dog came by, still looking for Schatzi after nearly a year. I wish I could tell him that his friend is no longer here to play with him. I should try and find his continued visits comforting rather than sad. I didn’t realize what an integral part of my day seeing Schatzi was until she was gone. She would trot by a few times a day, never coming in the house but always nearby. I could always count on seeing her smile and her distinctive prance. We all miss her so much.

Speaking of coming in the house, Yellow Cat just came a few steps into the hallway by the “front” door. It’s lucky for him that Audrey is Elsewhere. He certainly is a handsome boy. Even though I don’t live in Michigan, where they are considering a limit on the number of pets per household, I think I’ll self-impose a three cat limit for this household. I’m sure part-time cat staff Rob and Megan would agree.

While coffee perked, I waited for the ever-slow satellite interwebs to download my email, which was taking longer than usual. I was horrified by the number of messages until I realized that about 99% were birthday, not work, related. Huzzah! There was a really nice one from John and a text from my brother saying, “I’m so glad you were born. When do you want your party?”

I’m looking forward to champagne (already chilling) and Season Two of Orange Is the New Black, which will be released on Friday. It used to be that Sex & the City started their new seasons near my birthday, so OITNB is my new birthday present. I’m looking forward to watching it with my fellow fan Megan.

Thanks for all the birthday wishes! It’s lovely to be loved!