Woke up to yet another Wednesday power outage. At least it wasn’t in the middle of the night. What’s up with these out of season power outages? Maybe there’s a quota to fill, and since we hardly had any over the winter, now’s the time?

You’re probably wondering how the bathroom fix up is coming along. Anyone who has been through any kind of renovation or watched even a couple of hours of HGTV will not be surprised hear that it can be summed up in a word: slowly.

It’s partly because of the general Jamesian qualities of the room (all 7 feet by 5 feet of it), showcasing his inventive and carefree building practices, which have caused a few complications and will undoubtedly cause more, and partly because Rob’s been busy helping out over at the property where he can.

Still, a lot has happened since you last checked in with our heroine’s sanitary arrangements. Back then, Rob had just installed the shower pan, using found materials and creativity to make it straight, carefully sealed and glued in tight.

Up next were the faux tiles. It was slightly alarming to note that the little shavings Rob took off to make them meet properly were basically cardboard, but as he said, this is what they’re made for, so hopefully they will be OK. They have to be better than the mold-happy plastic stuff that was in there before. Right?

Here the first sheet of tiles has been applied and is being held into position while it dries. You can also see the sheetrock covering the cancelled window: 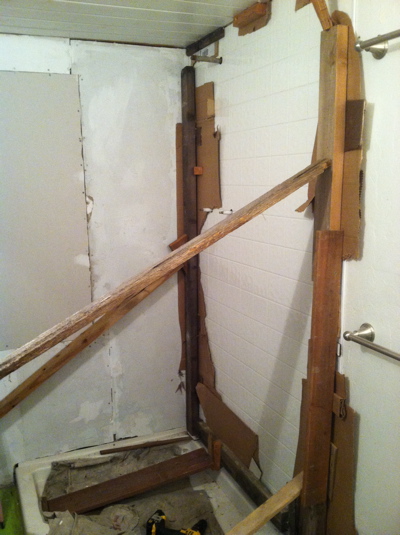 Here both sheets of tile are up:

Rob and I looked on line for a shower rod that would follow the lines of the shower pan, but they varied between $129 and $300, which equaled no for our non-budget. It seems a little odd to me that you can buy the shower pan standard but not the rod, though maybe they expect you to put in glass doors or something.

So Rob came up with something that was not only cooler, but basically free, since he found all the parts and then soldered them together. He added a support beam, so the rod isn’t supporting the entire weight of the shower curtain, especially when it’s being pulled aside: 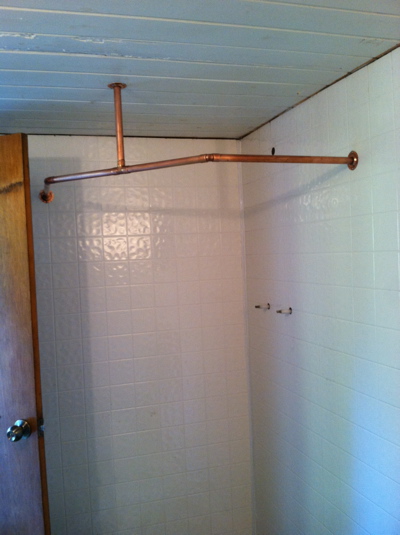 It’s made out of copper, and I think it’s beautiful. Here’s a close-up, so you can admire Rob’s artistry: 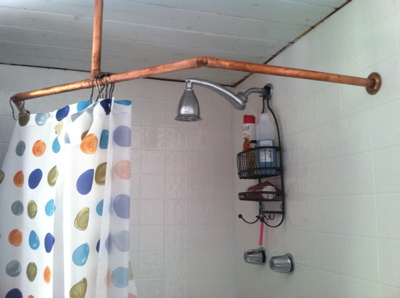 I got some copper finish curtain rings and a copper finish shower caddy (note to Self: some editing of shower products is in order). Here you see Supervisor Clyde melted beside the shower, since we are in Day Three of the third heat wave in six weeks. That’s not math I enjoy. 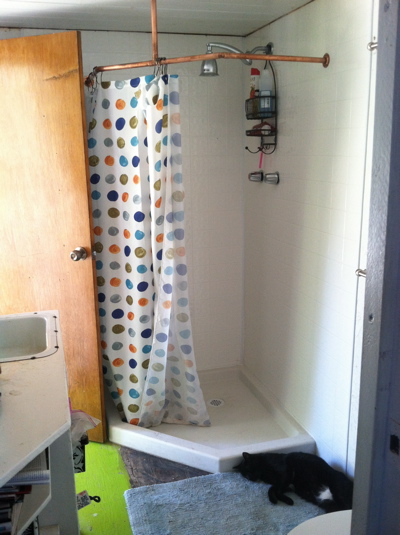 After almost a month, I had kind of forgotten about taking a shower inside, though I was glad it was summer while showering out on the back porch. Rob took out the water flow restrictor before reinstalling the showerhead (don’t tell Big Brother; I think it’s illegal), thus rendering the shower fabulous. I’m not saying it can clear the cobwebs out of my head early in the morning*, but it feels awesome.

*Not even atomic café can do that.