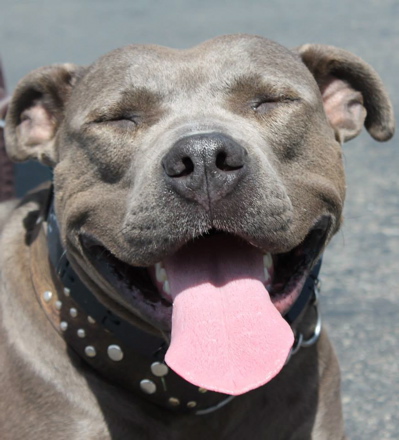 Hello, I love you – won’t you tell me your name?

I left Wednesday at the jobette on Saturday, after notifying our alley neighbor that I was doing so and asking him to keep an eye on her. I figured it made more sense to just leave the car there, rather than get a jump to drive it home and again to drive it back to the car doctor on Monday.

Megan and Stella (seen smiling above) spent six hours in the sun on Saturday, looking for potential adopters for Stella. Stella loved all the attention, the cars, the people, the kids – she is definitely not a bumpkin! After the event, they came to pick me up at the jobette. Due to the car show, they had to park four blocks away. On our way to the car, we turned onto a street where there were two surfer dudes hanging out on a bench.

They noticed Stella right away, and when we reached them, they reached to pet Stella. She responded by joyously flinging her arms around one of their necks and cuddling her big head against his blonde dreads. They both laughed with joy. That’s the way Stella rolls: 150%, 150% of the time. The dude said that if he didn’t already have two dogs…

On Monday, my wonderful colleague Erin gave me a ride to work. I really enjoyed carpooling with her – maybe we should do it when I don’t have a car emergency sometime (assuming that time ever comes). I’m so lucky to work with such great people who care so much about each other.

I called the car doctor and asked them to send the SWAT team to get Wednesday started and drivable to the garage. I was delighted that they sent two girls (complete with sparkly manicures) to do the deed. I handed over the keys and hoped for the best.

They called me later to say that the battery needed replacing. They had one in stock, and when I went to get Wednesday from car daycare, learned that they hadn’t charged me for the diagnosis and had discounted the labor and the battery in recognition of all the time and money I have spent there (undoubtedly in the hope that I will keep doing just that).

I drove home without incident, and without any lights appearing on the dashboard. I am now phobic about dashboard messages and lights- I wonder if there is a psychiatric condition associated with this? Waking up to another day and having the car both start and keep going is about all I ask for now. Maybe lower expectations = more happiness?

4 comments on “Adventures in Transportation”