I turned my focus from the dark side to the bright side over the weekend, or from one side of the circle of life to the other, if you will, celebrating Megan’s birthday. Megan’s birthday falls on the Memorial Day weekend (“First long weekend of the summer!”) and Jonathan’s on Labor Day weekend (“Last long weekend of the summer!”), and one of the great things about living here is that I can actually celebrate with them.

When I lived in San Francisco, I learned the hard way that traffic prohibited my visiting over holiday weekends in the summer, since most Bay Area residents had the same idea of coming here. Now my commute is just down the Ridge, no traffic involved.

Actually, it was a little further, since I had to go to the jobette and back in the Big Town, but still. Much better than being stranded on the approach to the Golden Gate Bridge for an hour!

It was a beautiful day. By the time I got there, the party was in full swing. Jarrett and his wonderful girlfriend Kalli: 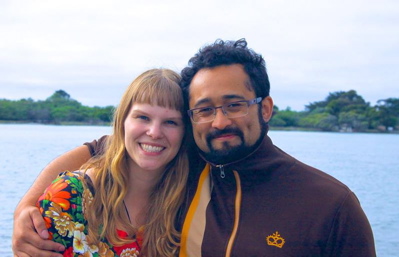 came with Archi, formerly the world’s cutest puppy, to surprise Megan. I knew they were coming for over a month and it was hard not to accidentally blurt it out. Megan was surprised and delighted, though I missed seeing the surprise itself. Jarrett enjoyed the surprise we gave him on his birthday so much, he thought he’d give it back!

Erica, Jessica, and Lichen were there, too. Another friend stopped by who we hadn’t seen for a while. Jessica hadn’t met her before, and wasted no time in walking up to her, shaking hands, and saying, “Hi, I’m Jessica,” unprompted by anyone. Needless to say, Jessica made a big impression (and a new friend). Jessica and I talked about a lot of things, including Marie Antoinette. Jessica’s take is that the tragic Queen’s “lack of understanding of statecraft” caused her untimely demise. She is eleven, right? 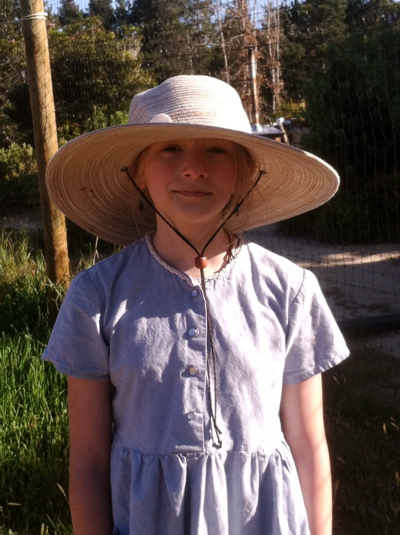 Our spokesjessica is seen here wearing a dress made by her multi-talented mother. 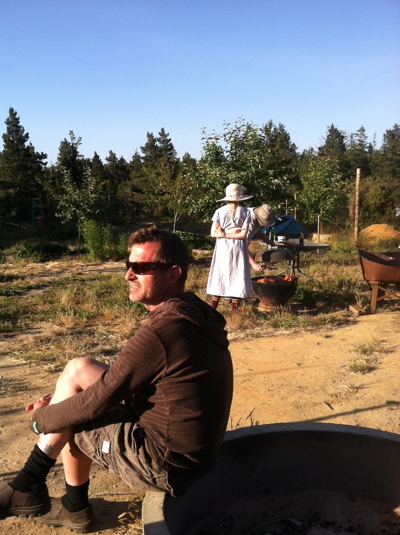 That’s Lichen perched on the fire ring after a long day of work. Here’s Archi hoping that Jonathan will drop some food in the fair game zone: 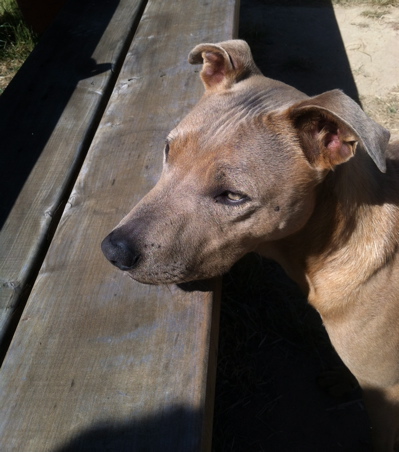 He still has the same adorable “worry” wrinkles between his ears as he did when he was a baby.

Jonathan had made a cherry pie from scratch, and Erica made two pies as well: 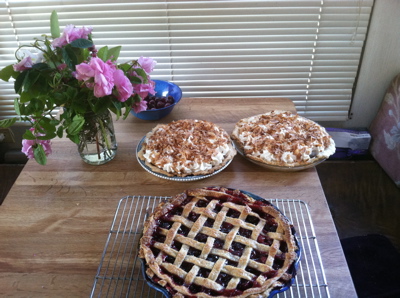 They were layered coconut and chocolate cream. Why have one or the other when you can have both? That’s pretty much Erica’s philosophy about everything. All the pies were incredible. I think for my birthday, I’ll just have pie and forget about the dinner. Isn’t that one of the few perks of being a grown up?

When I was ready to leave, Jessica offered her arm to me and said, “May I escort you to your car?” When we got there, she gave me a kiss and a curtsy, in that order. I love that kid.

The next day, I went over to see Jarrett and Kalli before they took off. They had camped in the giant garden overnight, discovering that a 70 pound dog + 2 people = no room. My timing was excellent, because my brother was making pancakes from scratch, served with strawberries from the garden and honey from the family bees: 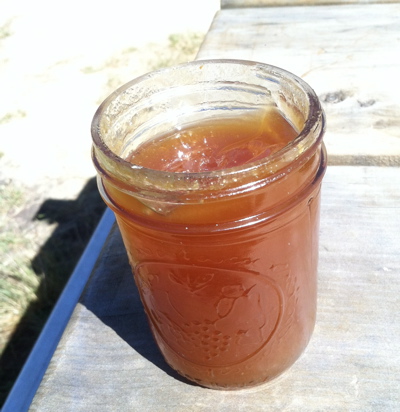 It was great having breakfast together in the sunshine. I didn’t even have to feel sad to see Jarrett and Kalli go, since they are coming back to celebrate her birthday in July with 20 or so of their closest friends. Summer’s here! Let the fun begin!