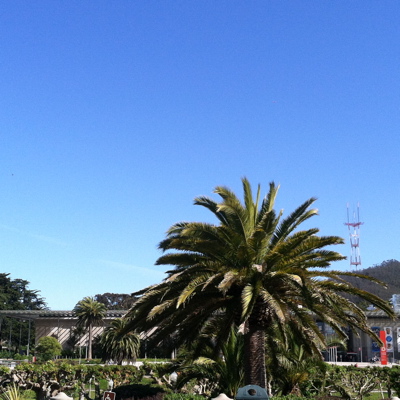 View from the museum: palm tree and Sutro Tower

After the conference yesterday, Wednesday and I headed out to the De Young Museum. It was her first visit, and I figured it was high time that young lady got some culture under her formerly shiny hood*.

The big draw this time, like Hockney last time, was the Georgia O’Keeffe exhibit, focusing on her paintings made at Lake George in New York, the state of my long-ago birth. I liked some of them, but they were not really my thing. I was interested to note that the crowd consisted almost entirely of women of a certain age and upwards – I believe the artist is considered something of a feminist icon. I appreciate that she was taking something dainty and feminine (gardens, flowers, leaves) and making it epic and arresting.

I preferred the exhibits of abstract art and the creation of the Bay Bridge, the Golden Gate’s older and less glamorous sibling. Peter Stackpole, a 21 year old San Francisco native, started documenting the bridge building in 1935. His photos of the dramatic shapes, dangerous building process, and the men who made this amazing structure are fascinating and moving. I love the abstraction and strength of this one: 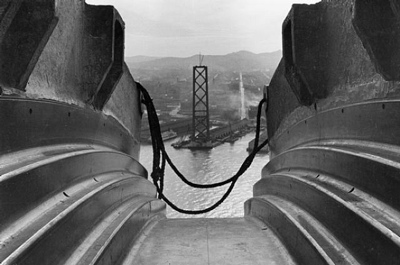 This photo shows men being sent home early after a fatality at the building site: 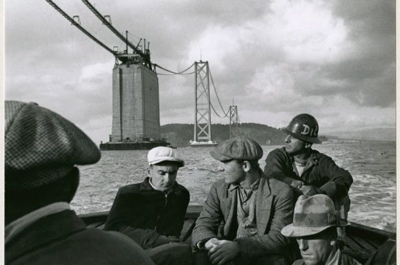 You can see the grief behind the stoic faces of these hard-working men who have just lost one of their own. 8,300 men worked on the bridge, and 28 of them died on the job. The bridge opened on November 12, 1936, and more than 150,000 cars crossed the bridge in its first 36 hours.

Peter Stackpole’s work earned him a one man show at San Francisco’s Museum of Modern Art in 1936, its inaugural year, and also a place on Life magazine’s founding staff of photographers.

Across the hall from the bridge exhibit was one of abstract art. I was a bad citizen and sneaked some photos on my phone while the guards were distracted by gossip and last night’s basketball scores.

This suite of square abstractions is by Frederick Hammersley, from the late 1940s: 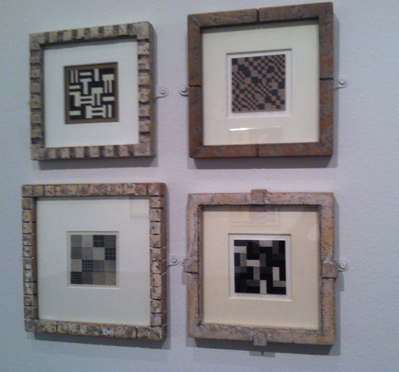 I love the precision and beauty of the lines. 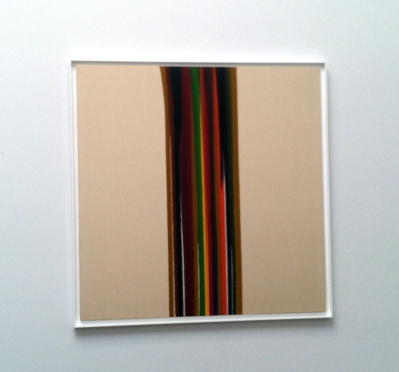 The colors are so dynamic and give it such movement. The artist was a pioneer in this type of painting, starting in the 1950s.

The most moving piece was this one, called Anti-Mass, made in 2005 by Cornelia Parker, who I was suprised to learn is an English artist: 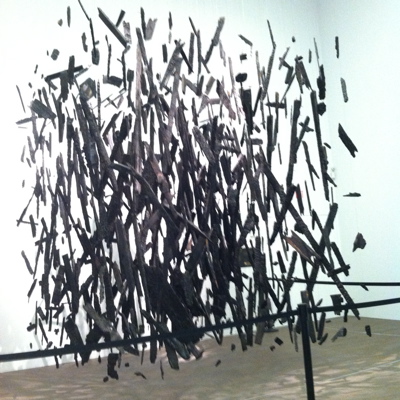 The piece is made from pieces of an African-American church in Kentucky, which had been destroyed by arsonists. It seems to float, yet has a powerful physical and emotional impact on the viewer.

On my way out of the museum, this glass vase by Dan Chihuly caught my eye: 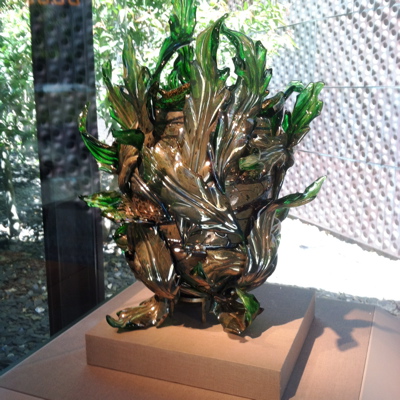 It’s beautiful in and of itself, but its placement beside one of the many windows showcasing the interior gardens and copper clad walls of the museum was particularly striking. Here’s another of those windows: 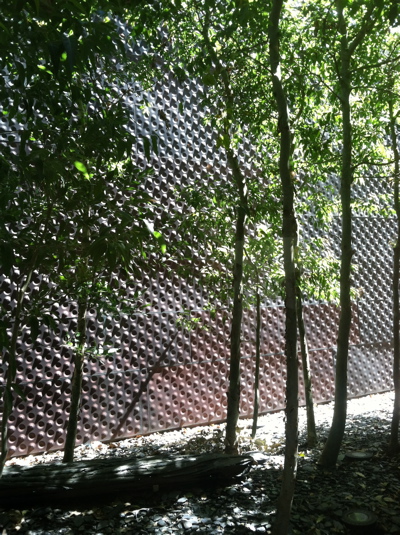 As for today: it’s time to pack up and head back to Hooterville, where Megan is no doubt rejoicing at being relieved of kitty duty.

*She has the dusty country look now. When I checked in at the motel, the clerk thought she was grey instead of black. Wish I had time to visit the car salon. Maybe next time.