We did get a little more rain – a peek at the rain gauge shows about an inch, and a peek at the weekly paper shows about 13 inches for the season, which is half of what we had at the same time last year. The so called heavy rain predicted for yesterday never did come true.

I woke up to a chilly house this morning, which I knew meant it would be clear today, with the duvet of clouds removed, and so it is. The frogs are singing joyfully in their appreciation of the rain, which I love to hear.

I swept up a passel of feathers which had mysteriously appeared under the stairs, though there was no sign of their (former?) owner. How did that happen? When I went out to toss the feathers into the woods, I noticed that there are some signs of hope in the garden, despite the destruction of the frost and the drought.

The honeysuckle by the kitchen door is beginning to sprout little green leaves, sparkling with rain: 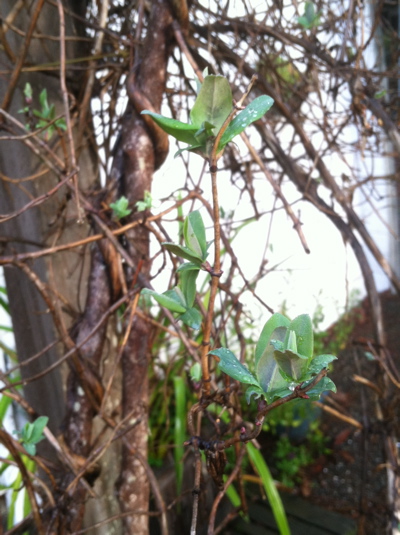 I cut back the Red Dragon plant outside the “front” door only to discover new leaves growing deep inside: 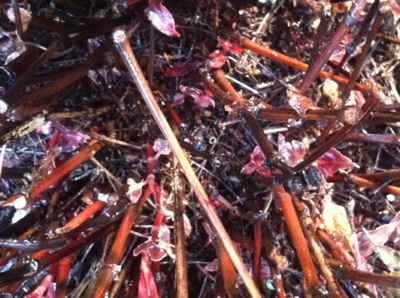 I cleared away the fallen pine needles, pine cones, and other debris to encourage the little leaves. The state of my usually cheerful geraniums was particularly depressing – black, rotted leaves and spongy stems – but apparently if the roots are healthy, they will come back in the spring. I hope so.

On my way back into the house, I noticed that the camellia bush is budding and should be flowering soon: 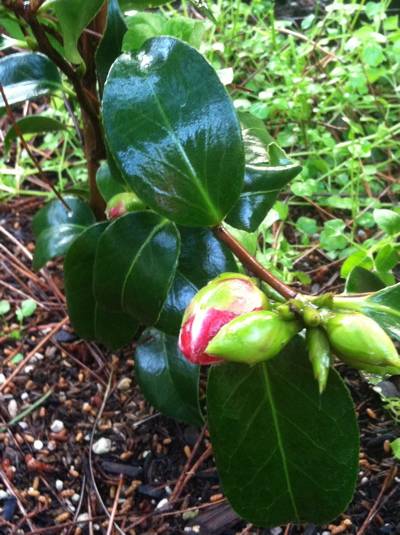