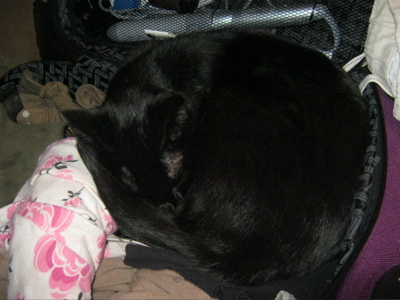 Clyde helps me to unpack

I’m back in Hooterville. I came home on New Year’s Eve, and for the first time I can remember in my many years of driving across the Golden Gate Bridge, traffic was completely backed up on the northbound (leaving San Francisco) side. Later, I saw three CHP cars, but no accident or stopped car or other reason for the slowness.

As I edged past the now empty toll booths, I thought about the time I didn’t have the two dollars for the toll, and had to pull into the office’s parking lot in my Mustang convertible and write a check. Good thing I had my checkbook with me – I never carry it now. And I remembered when there were actual people in the booths collecting our tolls (now $6), and the time I was totally delighted by the woman blasting music in her booth, dancing and singing along.

Once over the Bridge, traffic speeded up and Wednesday and I had no more delays. I stopped in Philo and picked up fresh crab – it’s Dungeness crab season – bread, and salad for dinner. The sun was just dipping into the Pacific as I reached Hooterville. I think I passed Megan on the Ridge, on her way to the drunk tank and maggot emporium that is the ER on New Year’s Eve.

I unpacked the car, though not the suitcase, and settled down with champagne and crab to watch “Downton Abbey” and say farewell to the old year. The new year began with coffee and the Winter Classic, which I love. It’s so fun to see hockey played outside, and the goalies even wore pads that looked like the old school ones (undoubtedly they were grateful that the similarity stopped there, since they used to be made out of leather, soaked up all the water from the ice, and were unspeakably heavy). Also it’s much easier to enjoy the romance of the falling snow from the comfort of your sunny California living room, rather than being one of the 105,000 fans in the single digit cold (not including wind chill) or one of the players on the often shoveled ice.

Still, it was a wonderful event and I am pleased to report that the Toronto Maple Leafs won over the Detroit Red Wings in a shoot out, giving them two much needed points. A good way to start the year.