Wow, I really have a lot of catching up to do! Today I’m getting ready for a quick and business-like trip to San Francisco, and I haven’t even told you about Thanksgiving yet.

In keeping with the the theme, I was clearly having too much fun at Thanksgiving to take pictures. I took pictures of the outdoor living room after I set it up for guests: 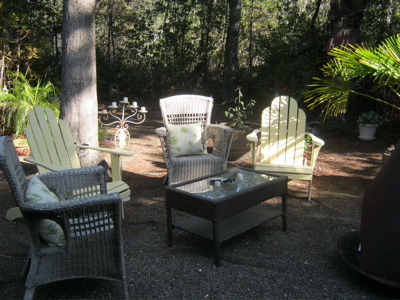 And the table indoors, with my American grandmother’s wineglasses (still unscathed!) and my English grandmother’s ivory-handled silver and Wedgwood: 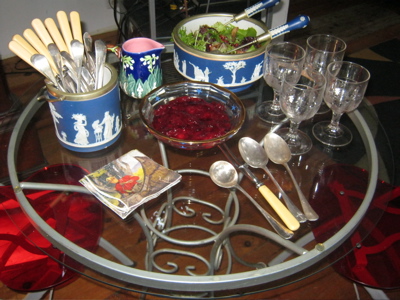 But that was it. I didn’t even take a picture of Jessica!

It was a lovely, sunny day, as you can see in the outdoor picture, though it did get chilly once darkness fell. My brother brought over a load of firewood so people could (and did) sit outside. My little house was overflowing with friends, family, food, and good cheer.

The turkey, if I do say so myself, came out perfect, despite the challenges of my odd little oven. I simply did it Nana style (she of the wineglasses): rubbed with butter, dusted with sage, salt and pepper. I really think a free range, organic bird makes all the difference. With it, we had the stuffing Jonathan made, along with his excellent gravy and mashed Yukon Gold potatoes and my famous cranberry-bourbon relish. We also had a salad of bitter greens with roasted pears and fresh pomegranate, with a honey-shallot dressing.

Erica brought rolls made with delicata squash from the family garden. To go with them, she made a beurre composé with clementine zest, paprika, and Strega liqueur which was out of this world. She also brought Brussels sprouts made in a magical Erica way which vanished almost immediately, and THREE pies. Two were made of a special squash with home-made sea salted caramel (Erica is, after all, the girl who makes her own chocolate nib spiked marshmallows and graham crackers from scratch before making s’mores), and one was an apple pie for Jonathan, who famously dislikes pumpkin pie.

However, the squash pies won him over with their truffley goodness (or is it evilness?) and the apple pie was almost as unscathed as the wineglasses when the party was over.

We talked to our good friend Paul, who wasn’t able to be here and will also not make it for Christmas, though he is planning to visit in January. It looks like a quiet Christmas this year, since Jarrett has to work and I think Lichen said he was going to visit his birth family in SoCal this year. Lichen turned up for Thanksgiving bearing gifts: a sprig of blue hydrangea he had dried himself for Jessica (which just happened to match her Erica Original dress); shower gels for Megan and me; and the bottle of Strega for Erica, which was immediately put to good use in the beurre composé merveilleux. Only Lichen would bring gifts on a non gift holiday only days after his own birthday.

He was joined in his usual eating spot on the stairs by Audrey, who loves Lichen. She slunk around and allowed other people to admire her before hanging out with her buddy. Clyde was his charming party self, working the room for pets. I thought Roscoe was outside, but after everyone left, he appeared from upstairs, where he was likely hiding under the bed until the coast was clear.

It was an amazing Thanksgiving and I am incredibly grateful for my family, my friends, and my life in our little corner of the world.