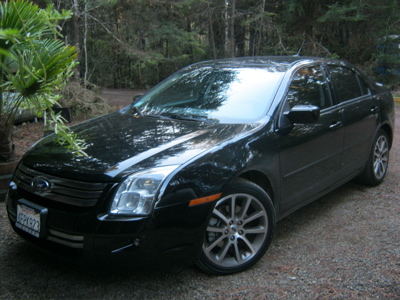 There’s nothing like driving The Beater to motivate a girl to buy a real car.

After an exhaustive (and exhausting) search, I finally located a car that met my two criteria of a) less than ten thousand dollars and 2) less than one hundred thousand miles on it. You’d be amazed by how hard it is to find a car that is both of these things. I saw some that were two years old and had more than 100,000 miles on them. That takes some serious driving.

So did the trip to get the car. Rob and I went all the way to Modesto, in the Central Valley, and back in one day – a round trip of about 500 miles. We left home at 7 am and got home about twelve hours later. I don’t think I’ve ever been in the Central Valley before. It was interesting to see a different kind of farmland – almond trees and orange trees, heavy with bright fruit, instead of vineyards and sheep.

The car is a 2008 Ford Fusion, with about 85,000 miles on it. My record of only owning Fords remains intact. Hey, if they were good enough for Clyde Barrow, they’re good enough for me. It’s a lot fancier than I’m used to, and characteristically, it has opened a whole can of neuroses.

I have never had a car note before, and I woke up at 3:00 am the night after I bought it, thinking about owing the bank thousands of dollars and what if something happens to it before I pay it off? What if the insurance rates go up after The Incident which led to the untimely demise of Miss Scarlett? The Incident really shook me up, too, so I’m nervous about driving at all, let alone driving a car that makes me look like a tourist. 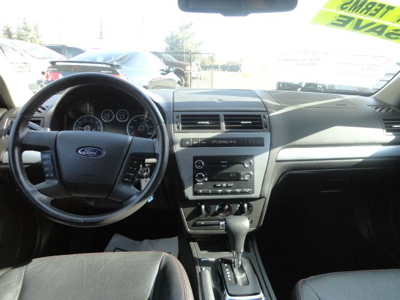 including one of those silly keys with a chip to lock and unlock the door which you cannot get copied at the hardware store, but rather, have to spend a bunch of money to get another one from an official source (but where?). A second key is a total necessity for a girl like I, who loses everything and has an advanced degree in screwing up.

In addition to it being so nice that I’m terrified to scratch it or dent it, it has gangster dark tinting on the back window and side rear windows, which is a necessity in the Central Valley, whee temperatures are routinely over 100F in the summer. However, it also makes it impossible to see anything in the rearview mirror, and thus it’s more likely that I will scratch or dent the car. I’m planning to get the tinting removed as soon as the holidays are over and just hope for the best in the meantime.

I felt kind of sorry for my new, as yet unnamed ride as we made our way down the rough, unpaved driveway. I imagined it thinking, “You’re kidding, right? You don’t expect me to live here?”