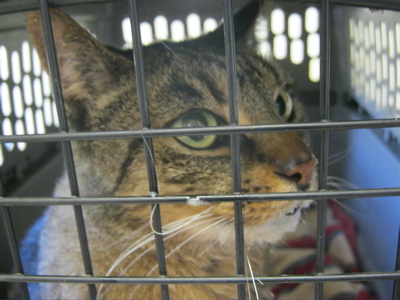 Little Miss Audrey was at it again…

Not closing herself in the dresser drawer all night, or madly clawing at the door to go out, or refusing to come in at night, or terrifying the neighborhood dogs*, though she does all that. After all, she is Audrey. She was allergic to fleas again, just like she was around the same time last year.

She was scratching all the time, losing her fur, and all scabalicious again. The boys were fine and I didn’t have any bites (other than this year’s plague of mosquitoes), but a flea must have hopped onto Audrey or breathed on her or something, so a trip to the vet was in order.

I was prepared for the evil ways of the Evil Genius, so I had extra towels and a garbage bag to carry the towels that would inevitably bear the poop of wrath back home to wash. However, Audrey surprised me by not pooping, though she did howl the entire way to the Village. Not even Springsteen could cheer her up, or cover up her dolorous chorus.

I think we all know who the real Boss is.

She had a ZZ Top style foam beard when I arrived at the vet’s, and the bars of the carrier were festooned with extra foam, just for extra fun. I made quite the entrance with a howling, foamy, balding, scabby demon cat. Exorcist, anyone?

The kind technician cleaned Audrey up and did the initial check up (Audrey is the exact same feathery weight as last year). She told me how very sorry the entire staff was about Schatzi, and added that they were glad that they had not had to do the deed. She said she would not have been able to hold back tears, and thought that Dr. Karen might not have been able to, either. They care for all their patients, but some are special. Schatzi, she said, was beloved by all of them.

Dr. Carl once again worked his magic on Audrey. I don’t think he believes my tales of the Evil Genius, who is fuzzy putty in his capable hands. He gave her a steroid shot and some antibiotics, and did a blood panel to make sure there was nothing else wrong with her. Fortunately, she is fine other than her flea intolerance – why not, she’s intolerant of everything else – and that was a relief.

Needless to say, she howled all the way home. A few miles from home, on a particularly curvy stretch of road, we came across an accident scene**, and were stopped in our tracks for so long that I almost turned the car off. Audrey did not turn off the entire time we were sitting there, and when we got home, I discovered that she had thrown up in the carrier. Still better than poop, though. She was also foamy again, but before I could wipe it off, she ran away, not to be seen until dinner time, when she acted like nothing had happened.

*Schatzi’s boyfriend Yellow Dog still comes around looking for her after two months. He always gives me this pleading look like, “Where is she? Where are you hiding her?” He’s such a nice dog. It is heart-breaking, but it’s also really sweet.

**I later learned that someone had swerved to avoid an animal and their car ended up on its side, as often happens in these cases. The people inside were OK, the car less so.

4 comments on “The Impatient Patient”